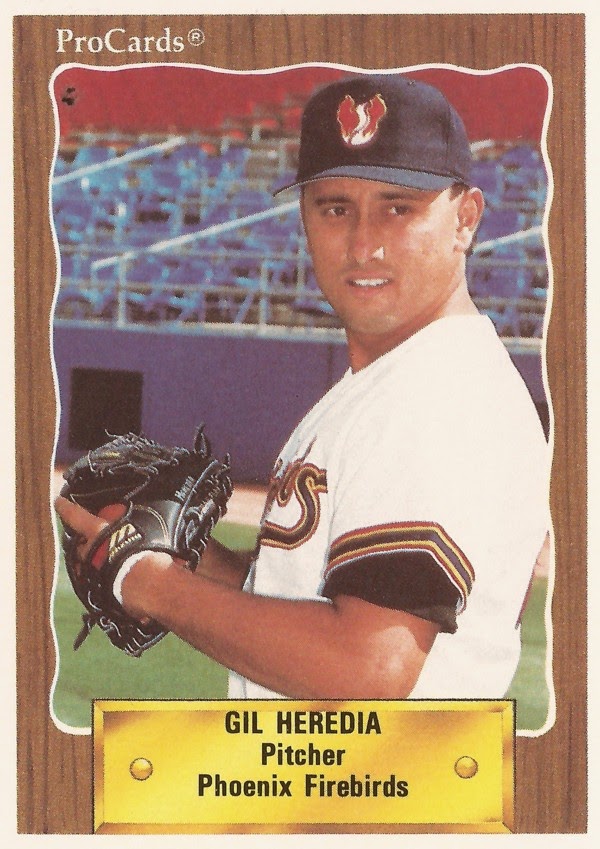 In his ninth season with time in the majors, 34-year-old Gil Heredia started off hot for the Athletics.

By mid-May, he was 5-2 and had an ERA of 2.52, a mark that put him fourth in the American League, The Associated Press wrote.

"I take great honor in that, but statistics are so overrated," Heredia told The AP as the questions about his early success came. "If I'm successful and consistent and we're winning games, that's what counts. If this were the end of the season, then yeah, obviously, I'd have something to say."

Heredia played for the Athletics that year, his 14th overall season as a pro. He went on to play in just one more.

Heredia's career started in 1987, taken by the Giants in the ninth round, out of the University of Arizona.

He played his first year between short-season Everett and single-A Fresno. He made AA Shreveport in 1989, then AAA Phoenix in 1990.

Heredia debuted with the Giants as a September call-up in 1991, getting into seven games, starting four. He posted a 3.82 ERA in 33 innings.

Heredia returned to the Giants for 13 more outings in 1992, before being traded to the Expos in August. He played with the Expos through 1995, getting as many as 40 outings in a season.

In 1994, Heredia was a part of the Expos team that had the game's best record when the strike came. By that time, Heredia had already pitched in 39 games and had a 3.46 ERA.

He arrived with the Rangers for 44 outings in 1996. He played 1997 between the Cubs and the Expos systems at AAA.

For 1998, though, he arrived with the Athletics, where he would spend the final four seasons of his career.

To start 1999, Heredia went toe-to-toe with his idol, Roger Clemens. Heredia went six innings, giving up one earned run in a game the Athletics would go on to win.

"Gil did a heck of a job," Oakland manager Art Howe told reporters later. "In the first two innings, he battled through some tough spots."

"is final year came in 2001 with 24 outings, 18 starts. That August, Heredia went three scoreless innings in relief, picking up a win against the White Sox.

"I really have not had a lot of opportunities like today," Heredia told reporters after that August 2001 game. "But when they arise, you have to take advantage of them and do the best you can. The biggest thing is to go out there and try to throw strikes."

"I think we've got ourselves a good group of guys," Heredia told The Missoulian in June 2012 of the new squad. "Every single pitcher that's here is ready and prepared for a challenge. As far as goals, we want them to have fun out there. We have about three months together and we want them to make it the best it can be."