The Greatest 21 Days caught up with Vic Rodriguez in August 2011, read the interview: Vic Rodriguez, Something Special 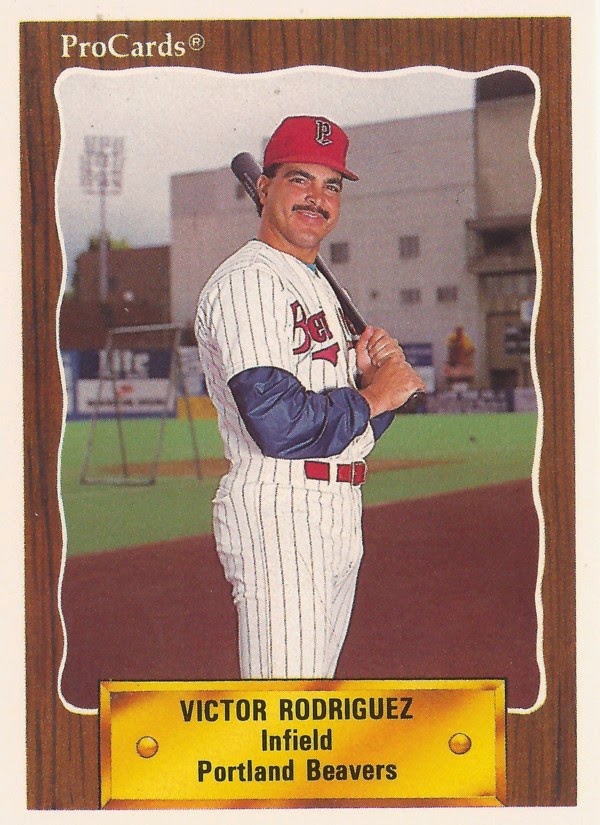 "I think he's going to do a good job," Rodriguez told The Sumter Item about McMillon. "He's very knowledgeable about baseball. We already know he can do hitting coach. This is not going to hurt us. It's going to help us a lot."

With more than three decades in baseball under his belt, Rodriguez would be in a position to know.

Rodriguez has spent almost that entire three decades plus in the minor leagues, including 19 seasons as a player and years more as a minor league coordinator. He did get to the majors, his big league resume consisting of all of 17 games.

Rodriguez' baseball career began in 1977, signed by the Orioles as a free agent. He spent his first two seasons in rookie ball, at Bluefield, hitting .293 and then .320.

Rodriguez made AAA for good in 1984. Save for those 17 games in the majors, Rodriguez would stay at AAA in one organization or another through 1995.

Rodriguez got his first taste of the majors as a September call-up for the Orioles in 1984. Rodriguez debuted Sept. 5, but he didn't get his first at-bat until Sept. 18, his fourth appearance. He went 1 for 2. In all, Rodriguez went 7 or 17 that September, including going 3 for 5 Sept. 20.

A Rodriguez single helped result in a run Sept. 24. He also just missed another single Sept. 21, with the fielder snaring the "scortching liner," according to a wire account.

Rodriguez didn't return to the majors until five years later, in 1989 with the Twins. In between, Rodriguez went through the Padres and Cardinals systems. In 1986, with the Cardinals at spring training, Rodriguez hit two home runs and knocked in five in a 17-9 crushing of Minnesota.

In that 1989 run with the Twins, Rodriguez got into six more games, his final ones in the majors. He went 5 for 11. One of those contributed to a Twins run July 28.

After that last look at the majors, Rodriguez stayed at AAA for the rest of his career, hitting the Phillies system in 1992, the Marlins in 1994 and Red Sox in 1995. He hit a two-run home run in an April 1994 game with the Pacific Coast League's Edmonton Trappers, having earned the title "PCL veteran."

For 1995, the minor league veteran tried replacement ball with the Red Sox. The strike over, he joined AAA Pawtucket, getting three hits in one April game. A month later, he joined the Red Sox as a hitting coach.

Rodriguez has gone through several positions with the Red Sox, making minor league hitting coordinator in 2006, after three years as the organization's Latin American field coordinator.

For 2013, Rodriguez moved back to the majors, as assistant hitting coach in Boston. He continues that role in 2014.