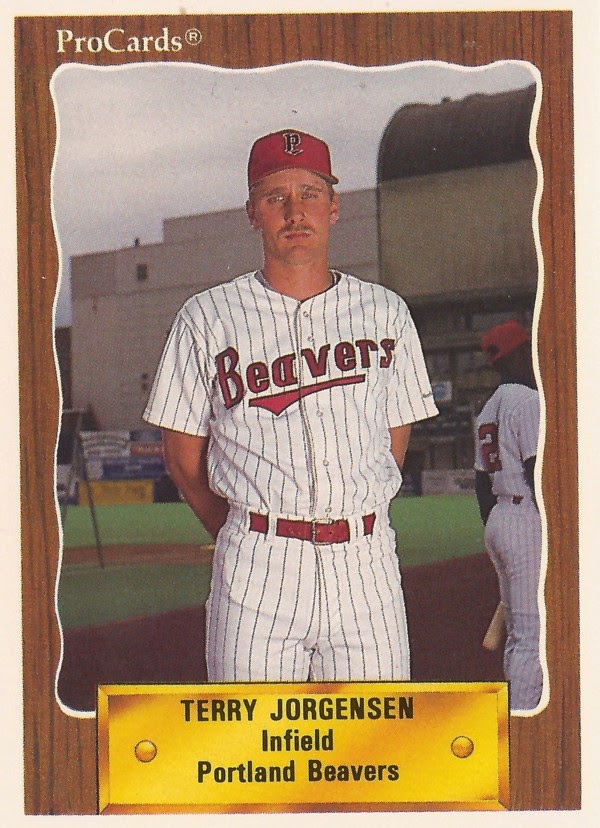 Stepping up to the plate in September 1992, Terry Jorgensen thought about what happened the last time, he told reporters later.

He was nervous then, he was jumpy, he put too much pressure on himself. The last time, three years earlier, Jorgensen got just four hits in 23 at bats.

"Today, I was just trying to calm myself down and relax," Jorgensen told reporters after his first game back. "I was happier today than I was last time I was here."

It showed. Jorgensen went 2 for 4, scoring twice and helping the Twins stay in the division race. Jorgensen ended up getting into 22 games that September, hitting .310 in 58 at bats.

Jorgensen also earned one more return to the majors the next season, and continued playing in the minors through 1996. And Jorgensen's connection to the game has continued as a high school baseball coach in his Wisconsin hometown.

Jorgensen's professional career began in 1987, taken by the Twins in the second round, out of the University of Wisconsin-Oshkosh.

At Oshkosh, Jorgensen helped his team to the Division III championship game, going 10 for 21 with three home runs in the Oshkosh series loss, The Milwaukee Sentinel wrote. He was also expected to go by the second round of that upcoming draft.

Credit Oshkosh coach Russ Tidemann with getting Jorgensen to play baseball at all, according to The Milwaukee Journal.

Tidemann spotted Jorgensen playing high school baseball on the news. He also learned he was going on to college, to play football. Thanks to intervention from Tidemann, Jorgansen rerouted to Oshkosh to play baseball, The Journal wrote.

"He's big and strong and he's an excellent hitter, probably the finest I've ever coached," Tidemann told The Journal. "He's very patient at the plate, and he's a good kid."

With the Twins, Jorgensen played his first year at single-A Kenosha, hitting .315, with seven home runs. He also earned a trip to AA Orlando for 1988.

In August 1988, Jorgensen helped Orlando win the second half of a double header with a home run. The home run came after advice Jorgensen received from a scout, he told The Orlando Sentinel after the game.

"He said I should stand up straighter, and I did," Jorgensen told The Sentinel. "It made me hit better in batting practice and helped me hit the homer tonight."

But Jorgensen finished the season with just three home runs. His average also dropped to .246. He returned to Orlando for 1989, hitting a better .263, with 13 home runs. He also became an All-Star, The Sentinel wrote.

"I appreciate how hard Terry has worked to improve his game," Orlando Manager Ron Gardenhire told The Sentinel in August 1989. "He's an extremely dedicated ballplayer who has a fine future in the Twins' organization. Everyone is pleased at his progress."

His progress continued that next month, to Minnesota. Jorgensen got into 10 games that year with the Twins, hitting just .174.

Sent back to the minors for 1990, Jorgensen played that year and the next three at AAA Portland. His second two seasons Jorgensen hit just under .300. He also earned that second call-up in September 1992.

For 1993, Jorgensen got into the most major league games of his three seasons, 59 games. He picked up 34 hits, including his only major league home run. But he hit just .224.

Jorgensen returned to AAA Portland for one more season in the Twins' system in 1993. He arrived in the Marlins system in 1994, playing at AA that year, then AAA Charlotte in 1995. But he didn't get called up to Florida.

One more season, with independent Green Bay, and Jorgensen's playing days were done.

Jorgensen has gone on to coach at his high school alma mater, at Wisconsin's Luxemburg-Casco High School. He was also inducted into the UW-Oshkosh Hall of Fame in 2001.