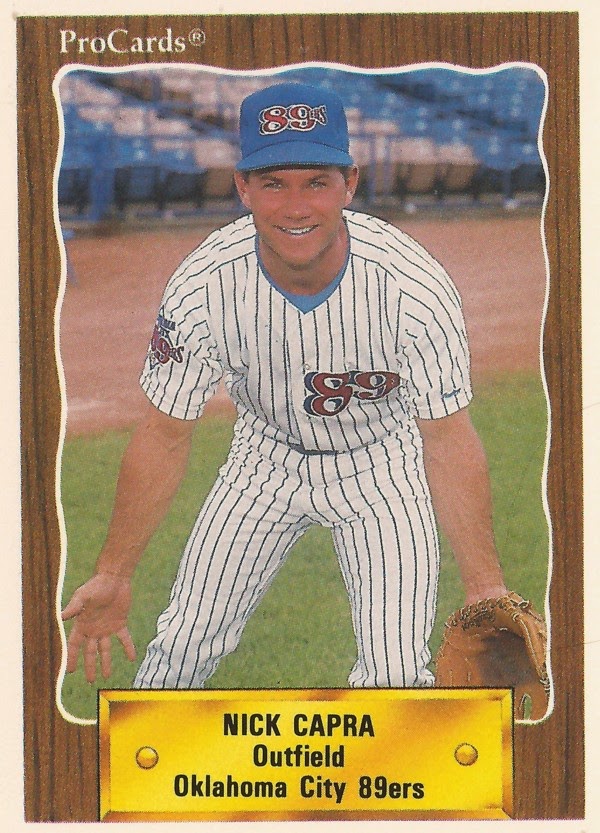 Nick Capra made his first trip to the majors in 1982, playing with the Rangers. Put in as a pinch runner in one game, Capra took advantage of a bad pickoff throw to third, scoring the winning run.

"I tried to get up and run and (Angel Doug) DeCinces held me," Capra told The Associated Press later. "I believe the umpire would have given me home plate but I made it anyway."

Capra had made it to the majors in his fourth season as a pro. He ended up getting into four more big league seasons, in a playing career that spanned 17 years.

Capra's total major league games played in that time over those five seasons, though, was brief, with Capra getting into all of 45 big league games in his career.

Capra's career began in 1979, taken by the Rangers in third round of the draft, out of the University of Oklahoma. He also started at AA.

Capra got into 13 games that September with the Rangers. He picked up four hits in 15 at bats. One of those hits came on a home run, the only home run he would hit in the majors.

Capra got back to Texas in 1983, for eight games, but only two at bats. At AAA Oklahoma City that May, Capra hit an inside-the-park home run.

In 1985, he got into eight more games with the Rangers, with one hit. After two seasons back at AAA, Capra returned for 14 games with the Royals in 1988, getting four hits in 29 at bats.

His final major league appearance came in 1991, two games back with the team that drafted him, the Rangers. He got to the plate twice, walking once and scoring a run.

Capra, though, continued playing in the minors through 1995.

In addition to those 45 games in the majors, Capra's final total for games played in the minors hit 1,888. He amassed 515 stolen bases and 1,170 runs scored, all in the minors.

Capra has gone on to a long career as a minor league manager, instructor and coordinator. He started in 1996 as manager at rookie Bristol. By 2002, he was manager at AAA Charlotte, where he ended his playing career. In 2010, he served as White Sox field coordinator.

In 2005, Capra served as manager at single-A Kannapolis, helming the team to the South Atlantic League championship. The team won after a marathon 21-inning first round Game 1 victory.

Capra told The Charleston Post and Courier the key was not looking ahead.

"(Losing) would have made it more difficult on us," Capra told The Post and Courier of that early win, "but you always have to concentrate on the game you're playing."