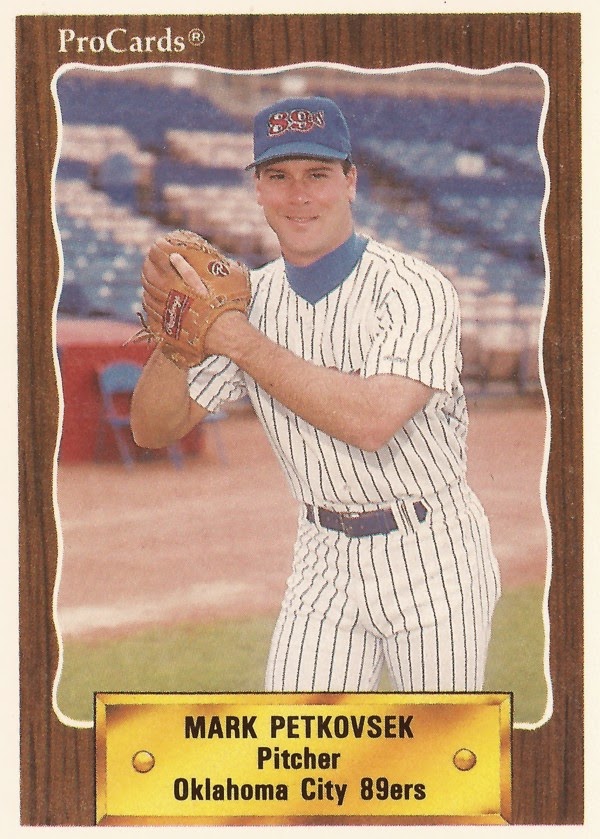 Mark Petkovsek had spent parts of nine seasons in the majors, his last in 2001. But, in spring 2003, he gave it another go. It didn't work out.

"The longer I got into it," Petkovsek told his hometown Beaumont Enterprise in June 2003. "I started missing my family. My mind drifted in baseball situations and I would be thinking I wasn't sure I really belonged out here.

"I'm going to miss it," he added to The Enterprise. "The love and dream of playing baseball has been a blessing to me."

Petkovsek's professional career was one that started in June 1987 with the Rangers, taken in the first round of the draft. He played at Port Charlotte for 1987, going 10-11 with a 2.97 ERA. His ERA was helped along by five-straight shutouts. He made AA Tulsa in 1989, then got a taste of AAA Oklahoma City that same year.

It was in June 1991 that Petkovsek made his major league debut. He pitched in four games that month. In the first, he went 4.2 innings, giving up seven runs. In his fourth outing, he did worse. He gave up six runs, but in only 2.1 innings.

By 1992, Petkovsek had moved on to the Pirates organization, pitching at AAA Buffalo. He didn't return to the majors until 1993, getting into 26 contests for the Pirates as a reliever. His ERA doing a little better, at 6.96.

Signed by the Astros for 1994, Petkovsek didn't make it to Houston, but he did pitch himself a gem. In May, Petkovsek threw the first 9-inning no-hitter in Tucson Toros history.

"I just kept on trying to do the same thing in the late innings and not think about it,'' Petkovsek told The Arizona Daily Star afterward. "I carried on and didn't do anything really different. I talked with the guys in the dugout."

By the time Petkovsek made it to Houston, the closest major league city to his hometown, it was 1995 and Petkovsek was a Cardinal. There were 80 family members and friends in the ballpark. Petkovsek got the start and didn't make it through the second inning, giving up six earned runs. "I think maybe I got caught up in it all," Petkovsek recalled later to The Enterprise.

But there were better outings that year. The one just before that, Petkovsek threw a complete game shutout. In August, he threw back-to-back seven-inning outings giving up one run between them.

That year in 1995 was the first of seven-straight seasons in which Petkovsek saw major league time. He was with the Cardinals for four of those, before being traded to the Angels. He spent two seasons there then his final year back with the team that drafted him, the Rangers.

In May 1998, with the Cardinals, Petkovsek pitched seven shutout innings, keeping his team in the game in a game the Cardinals would eventually lose.

"Petkovsek was such a hero," Cardinals manager Tony LaRussa told reporters afterward. "We haven't had a tougher loss this year."

With the Angels in July 1999, Petkovsek wasn't the hero. Pitching in relief in the ninth, Petkovsek had runners on first and third. He went to fake a throw to third, but the ball popped out of his hand and rolled into foul territory, The Los Angeles Times wrote. The go-ahead run came home.

"There was a split-second where I didn't know what happened," Petkovsek told The Times. "Then, I never had a chance to reach it. I was trying to steal an out. It's not a mental mistake, the ball was dry. It just popped out of my hand."

Petkovsek was 33 years old at that point. He had already been feeling his age since he was 30 with the Cardinals in 1996. That September, in a spot start, he went five innings, giving up two hits. It was just his fifth start of the year. But didn't mind, he told The Associated Press.

"That's why they send guys out to war when they're young," Petkovsek told The AP, "because they feel like they can conquer the world. When you get a little older, you figure out you need help."