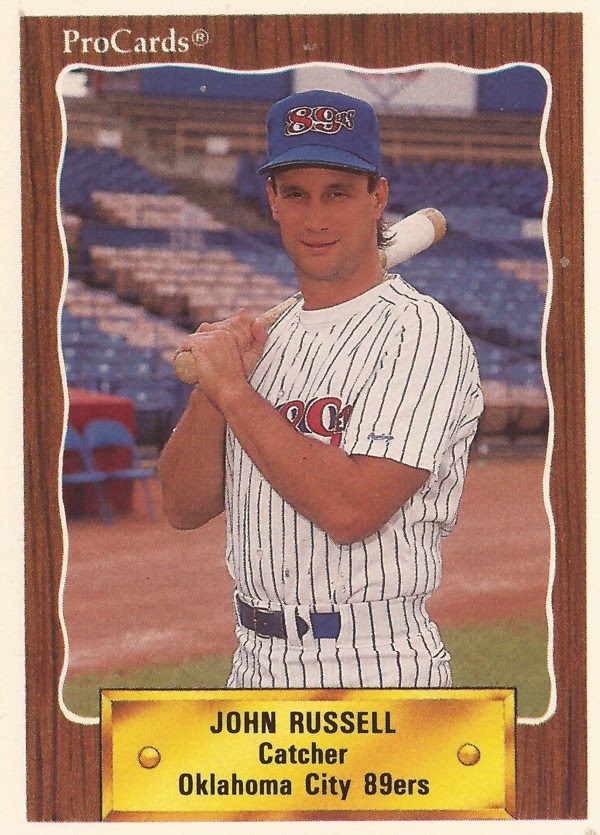 Called up to Texas less than a month earlier, John Russell found himself catching Hall of Famer Nolan Ryan, June 11, 1990.

If it had stopped at that, Russell would have been satisfied. But it didn't. On this night, Ryan threw his sixth no-hitter and Russell was the one who caught it.

"It was the first time I ever caught him, and that was a big enough thrill," Russell told The Chicago Tribune afterward. "And then he throws a no-hitter. It was like I was in a coma."

Russell was in his seventh major league campaign, having debuted in 1984 with the Phillies. It was the Phillies who drafted him out of the University of Oklahoma in the first round of the 1982 draft.

His playing career continued through 1993, and by 1995 Russell had begun his career as a manager, a career that continues today in the majors as manager of the Pittsburgh Pirates.

Russell's ascent to the majors was quick. He began at AA Reading in 1982, hit AAA Portland in 1983 and then Philadelphia in June 1984. It was an injury to Bo Diaz that resulted in Russell's first call-up. He had hit .311 for Portland with 14 home runs and 61 RBIs.

With 14 home runs under his belt at AAA, Russell didn't wait long for his first one in the majors. In his third game, his sixth at-bat, Russell deposited one over the wall at home in a loss to the Mets.

Russell went on to play 39 games that year for the Phillies, hitting .283. That increased to 81 games in 1985 and then 93 games in 1986. The last year Russell served as the Phillies' starting catcher after Darren Daulton went down with an injured knee.

He was credited with saving the Phillies in June. He had six hits and five RBI in two games that month. He also hit a home run to win a game against the Cubs, hitting it off Lee Smith.

But Dalton returned for 1987 and the Phillies picked up Lance Parish. Russell was sent back to AAA Maine. He played in only 24 games for the Phillies that year, hitting just .145.

Russell stayed with the Phillies through 1988, when he was purchased by the Braves, playing in 74 games in 1989. Russell then didn't make it through spring training in 1990. He was originally told he'd made the team, then told he hadn't after the Braves picked up somebody else, according to an AP account.

But it was that release that led Russell to the Rangers and to Nolan Ryan. Russell played in just six games at AAA Oklahoma City then got the call-up. Russell played with the Rangers in Texas and in the minors through 1993, his final game coming Oct. 2. 1993.

By 1995, Russell was managing in the minors. He was with rookie-level Elizabethton in the Twins system that year, made AA New Britain in 1998 then AAA Edmonton in 2000. In 2006, Russell returned to the system of the team that drafted him, the Phillies, managing at AAA Scranton, then AAA Ottawa. In the middle, he served as Pirates third base coach from 2003 to 2005.

In November 2007, Russell was named manager of the Pirates. He managed there through 2010.

"I think we have a great core of players right now," Russell told the Associated Press after being hired. "We have the pieces to win now. It's just a matter of getting the passion, the accountability, the attention to detail. That's what works. My role and the staff's role is going to be huge and we're going to be diligent, but I like what we have."