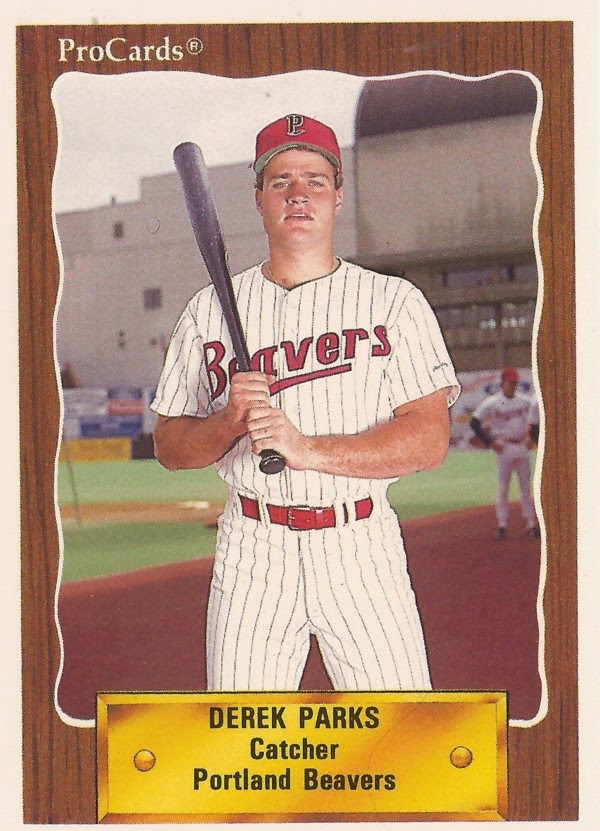 Five years after the Twins took him in the first round of the draft, this was not where Derek Parks wanted to be. He'd made AAA Portland the previous year. But, by 1991, injuries and overall poor play left him back in Orlando, at AA.

''If I stay healthy, I know I can hit,'' Parks told The Orlando Sentinel that May. ''I was angry when they (the Twins) sent me back to Double-A ball this spring. But I'm over that. It doesn't matter where I play as long as I get a full season in and pile up some numbers.''

The catcher would eventually make it to where he wanted to be, the majors. But the former 10th overall pick would make it for three all-too-short stints totaling 45 games in all, his last coming days before the 1994 strike began.

Parks was selected by the Twins straight out of Montclair High School in California as a 17-year-old. Baseball America had ranked Parks as the fifth best prep player going into the draft, according to The Los Angeles Times.

But, that May, Parks was still undecided about going pro.

"The draft has got to beat what the colleges offer," Parks told The Times. "If not, then it's simple: I go to college."

But he soon decided, he signed with the Twins, playing that first year with rookie league Elizabethton. But, after hitting .507 in high school, Parks hit just .237 with 10 home runs in rookie ball.

The next season, at single-A Kenosha, Parks hit a little better, but not much, hitting .247. But he hit home runs, 24.

''Not only does Derek have good power, but he's durable, and has a very strong arm. The Twins' organization is very high on him,'' Orlando coach Steve Comer told The Sentinel in May 1988. ''He was a top prospect last year and was able to jump to AA ball from rookie league, so he is being pushed along.''

That was the year Parks first made AA Orlando, hitting a grand slam in an April game. But he still hit just .235 and just six other home runs. The next spring Parks, still just 20 years old, played in his first major league exhibition game in March 1989 and Parks was a nervous wreck, The Sentinel wrote.

''Here I was catching the Cy Young winner my first time out," Parks told The Sentinel. "I couldn't eat before the game. And then I could only go by instincts. Frank Viola was wonderful.''

He returned to Orlando, his average plummeting to just .189. He also was out for six weeks that year, injuring his thumb in June trying to catch a wild throw, The Sentinel wrote. Still, he was promoted for 1990 to AAA Portland. Still, his average got even worse, .177.

Back in Orlando for 1991, Parks improved, but just a little. He hit a two-run home run to help the O-Twins to a 3-2 victory in April.

"He's been slow to develop, plagued by injuries,'' Orlando manager Scott Ullger told The Sentinel that month. ''This could be the time for him to come along.''

Parks' hitting didn't come along. He hit .215 on the year, with six home runs. He returned to Portland for 1992, improving his average to .245 with 12 home runs. It was enough for Parks to finally make Minnesota as a September call-up. He got into seven games, getting two hits in six official at-bats.

Parks returned to Portland for 1993, getting another September call-up with another seven appearances. This time, he got 20 official at-bats and four hits. He also got his first major-league RBI Sept. 29.

By 1994, Parks landed in the majors from the outset. He played sparingly, getting in 31 games, but he stayed up the full year, until the strike. He got three hits in a June game, his first and only major league home run in another game that month. His final game came Aug. 5.

The strike underway, Parks and the other major leaguers settled into life without big league ball. Parks began work in September as an assistant coach for a girls soccer team. But, while the major leaguers would return in April, Parks wouldn't, his once-promising professional baseball career ending the month the strike began.