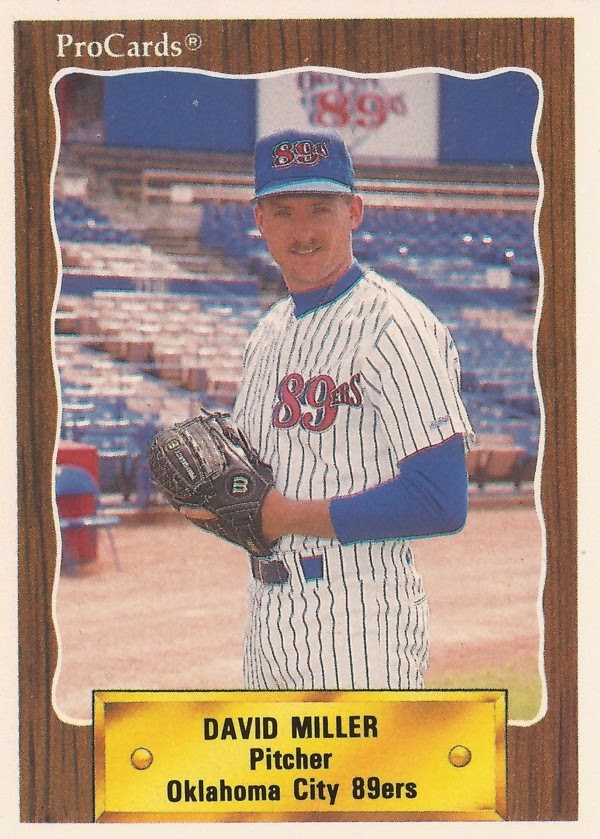 Looking for his fourth win on the young season in 1989, David Miller went out and got it.

Pitching for AAA Oklahoma City, Miller threw a complete-game shutout against Columbus. He gave up eight hits and no walks to pick up the win, 2-0.

Miller went on to collect a total of nine wins for Oklahoma City that year, against 13 defeats. In his fourth professional season, Miller had made it to AAA.

Miller, though, never never got a chance to throw a shutout, or anything else, in the majors. His career ended the next season, back at AAA.

A native of Jacksonville, Fla., Miller's career began in 1986, signing with the Braves. He played that first season between the rookie Gulf Coast League and the rookie Pulaski Braves.

Used mainly in relief that first year, Miller posted a 1.79 ERA on the season, and picked up eight saves.

Late in spring 1989, though, the Braves shipped Miller to the Rangers for a reliever. For the Braves that spring, Miller pitched five innings, exiting with a 7.49 ERA.

Miller went on to play those two seasons at AAA Oklahoma City. He went 9-13 his first season and 7-9 his second, ending his career after five years, short of the majors.