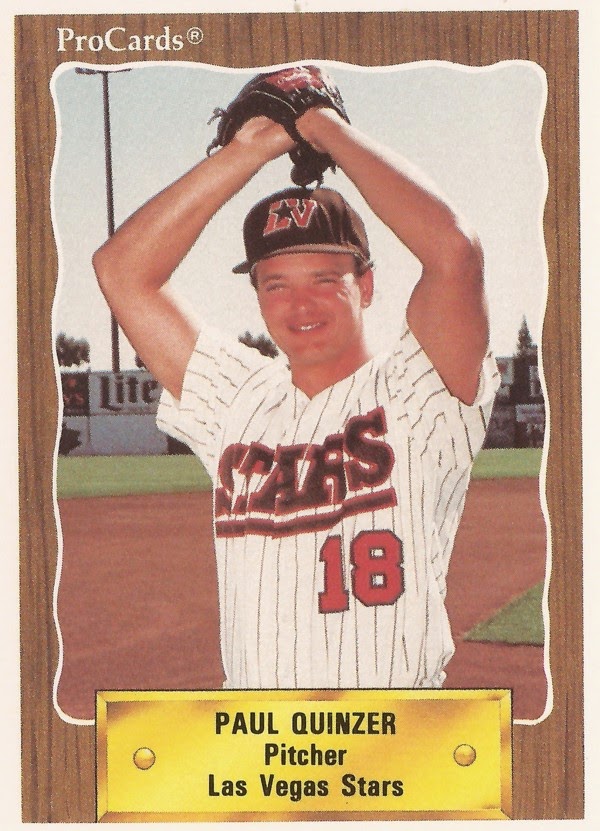 Paul Quinzer gave up one early home run in this July 1985 collegiate league contest and then didn't give up another run.

Over seven innings for the Nevada Griffons, Quinzer gave up a total of three hits, struck out 13 and walked none for the victory, The Nevada Daily Mail wrote.

"He totally dominated," Nevada manager Dave Jorn told The Daily Mail afterward. "He kept the ball down for the most and then came up and challenged them."

Quinzer's pro career began in 1986, taken by the Padres in the 10th round of the draft out of Indiana State.

At Indiana State, Quinzer gave up just 2.37 walks per nine innings of work through his four-year college career. That mark is still second all-time at the school. He also picked up 25 wins and threw three shutouts. In April 1986, he struck out 13 in a game.

Quinzer spent his first pro time at short-season Spokane. He went 5-5 in 15 starts, with a 3.48 ERA. In June, Quinzer struck out 10 in a game. In July, he pitched into the eighth inning of a contest with a one-run lead while giving up seven hits. He then hung a slider, resulting in a game-tying double, The Spokane Chronicle wrote.

"Maybe if I'd been fresher, I don't make that pitch," Quinzer told The Chronicle afterward, "but I really didn't feel like I was tired. They hadn't been hitting the ball that hard - a lot of those hits were bleeders."

He went eight innings in an August game while giving up only three hits.

He split time in 1989 between Wichita and AAA Las Vegas. In 40 outings that year, he had a combined 3.36 ERA and six saves. His final pro season was his fifth pro season. He got 31 outings at Wichita in 1990 and five at Las Vegas. He ended his career with an ERA of 4.43.

Quinzer has gone on to a career in teaching and as a high school coach. He is listed as coach at Mount Vernon High School in southern Indiana, about 30 miles from where he went to high school himself.

In May 2012, the former pitcher watched his team pick up an 8-2 win. He told The Posey County News afterward his team took advantage of its opportunities against the opposing pitcher.