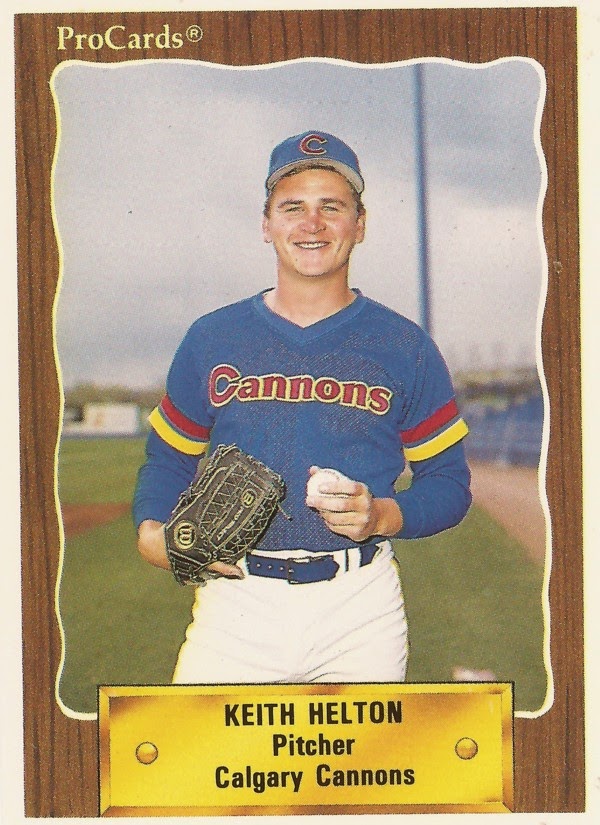 Keith Helton did well for the short-season Bellingham Mariners, enough so that he became manager Rick Sweet's go-to guy in a pen depleted by promotions.

Helton is "the only guy in the bullpen who can help me," Sweet told The Spokane Spokesman-Review in July 1987.

Helton joined the Seattle system that year, taken in the 14th round of the draft out of the University of Arkansas. Sent to Bellingham, Helton appeared in 28 games, earning his manager's praise with a stellar 1.31 ERA.

But later seasons would not be as good, especially as he reached AAA. In 100 games at AAA over parts of four seasons, Helton posted an ERA north of 6, at 6.16. Helton never made the majors.

A native of Little Rock, Ark., Helton played college ball at the University of Arkansas. He also played summer college baseball briefly in 1985 for the Nevada Griffons in Missouri. But there were too many pitchers on the team, and Helton was the odd man out.

"I'd love to come back next year," Helton told the Nevada Daily Mail that July. "I like this town and all the people I've met. It was just one of those things where we had too many pitchers and this was the best thing to do."

With the Mariners, Helton played at single-A San Bernardino in 1988, throwing a sub-3 ERA and making the California League All-Star team. A brief promotion to AA Vermont, saw that increase to 4.72.

The next year, at AA Williamsport, Helton's ERA again dipped to stellar levels, this time to 1.72. In June, Helton combined with Dave Burba on a six-hit shutout against Albany-Colonie. The next month, Helton struck out the side in the ninth against Reading for his 11th save. Then came AAA. Eight games with Calgary, saw Helton give up eight earned runs in only 14.1 innings.

But it was Calgary where Helton would stay through 1991. After posting a 5.80 ERA at Calgary as a reliever in 1990, Helton tried his hand at starting the next year. It went about as well.

In June 1991, Helton helped give Tacoma its best inning at home on the season, according to The Seattle Times, with 12 batters chasing Helton in the fifth. The next month, Helton gave up nine hits and five earned runs in four innings, The Times wrote.

Helton's ERA that year was 6.46. Returning with the Mariners AA team in Jacksonville briefly for 1992, Helton joined the Astros system at AA Jackson, then AAA Tucson. In two appearances for Tucson and four innings, Helton gave up four earned runs and his career was done.