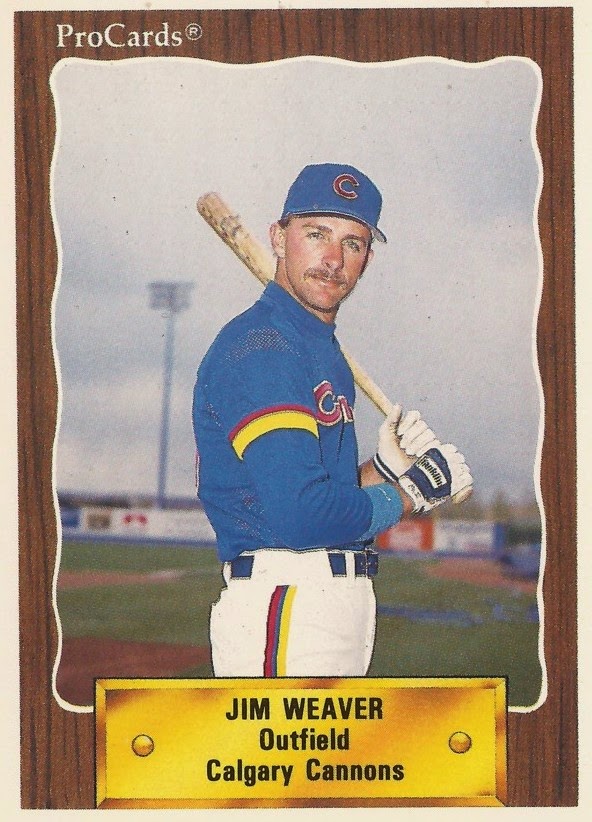 Jim Weaver wasn't surprised the Twins didn't protect him for the winter draft, he told The Associated Press in spring 1985.

The career minor leaguer hadn't played well the previous year at AAA Toledo, he was only hitting .230 and he wasn't playing every day.

"See, that's not my strength," Weaver told The AP as he worked to make the Tigers and debut in the majors. "I've always been an every day ballplayer."

Weaver did make the Tigers out of spring 1985, and he stayed up for nearly two months. But he hardly played. Over his two months with the team, he only got into 12 games, eight plate appearances and one hit, a double. By June, he was back with the Twins.

Weaver went on to play a total of 11 seasons as a pro. He would only make the majors twice more, seeing action in just 19 more big league contests.

Weaver's career began in 1980, taken by the Twins in the second round of the 1980 draft, out of Florida State University. Weaver signed with the Twins, forgoing his senior year.

With the Twins, Weaver began at AA Orlando, hitting just .212 in 58 games. He then played much of the next year at single-A Visalia, upping his average there to .283.

"There's an adjustment coming into pro ball," told The Sarasota Journal. "One of the biggest is going from aluminum bats to wooden bats. Playing every day is another. But we have high hopes for him. He has a lot of ability."

Going into 1984, Weaver hoped he would make Minnesota, telling The Journal he knew he still needed more maturing, but he was nearly ready.

"And I know one thing - I still love to play baseball as much as ever," Weaver told The Journal in March 1984. "I play with enthusiasm. I love running and throwing. It means as much to me to throw a guy out as it does to hit a home run."

After being drafted by the Tigers, and spending the first two months of 1985 in Detroit, Weaver returned to the Twins and Toledo. By August, he was in the Indians system, send there in the Bert Blyleven-Jay Bell deal.

Weaver next saw the majors in 1987, with the Mariners. He got into seven games there, six plate appearances, no hits.

Weaver then saw his last time in the bigs in 1989, with the Giants. He got another 12 games with the team, but 20 total at bats. He picked up four final hits, three of those doubles, ending his big league career.

Weaver played one more season in the minors, his 11th as a pro, back with the Mariners at AAA Calgary, without seeing Seattle, ending his professional career.