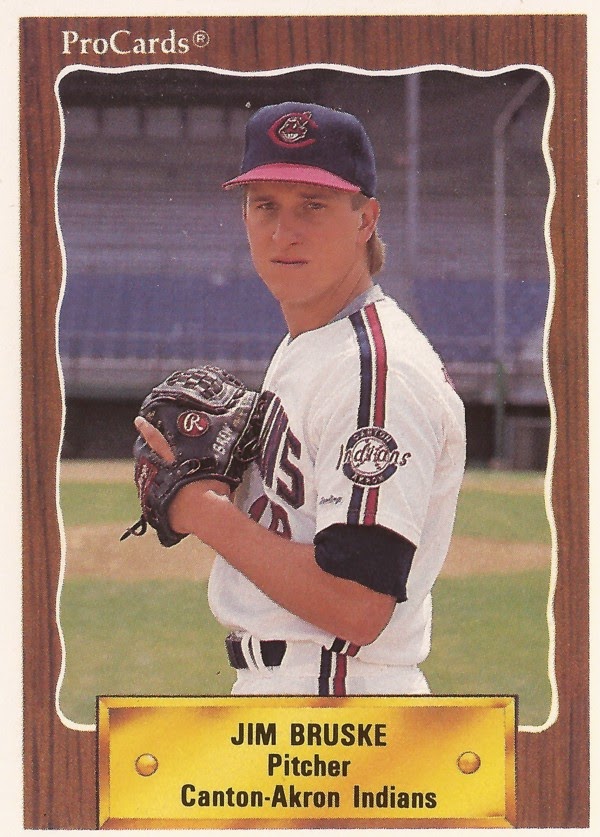 To The Los Angeles Times, Bruske looked forward to his home debut - at Dodger Stadium.

"I've always watched games here from a fan's standpoint," Bruske told The Times. "The first time I get out there I'm going to pause, look around and enjoy the moment."

Bruske enjoyed the moment that year and in four more major league seasons. His final big league season came in 2000, after a season lost to Tommy John surgery.

Bruske also first made the majors in what was his 10th professional season. In his first three pro seasons, Bruske wasn't even a pitcher. He was an outfielder.

Bruske's career began in 1986, taken by the Indians in the first round of the June secondary draft out of Loyola Marymount University in California.

Bruske helped lead Loyola Marymount to the College World Series, his bat leading the way. With that, the Indians kept him in the outfield, according to The Times. Then, for 1990, the Indians switched him to pitcher.

"Basically I started from the beginning (as a pitcher)," Bruske told The Times in August. "Mechanics-wise, I was not even close to what I should have been. The pitching coach there, Will George, really helped me a lot. And he still is."

Bruske debuted with the Dodgers Aug. 25, 1995. In nine outings that year, Bruske gave up five earned in 10 innings. He returned to the Dodgers for another 11 outings in 1996 then moved to the Padres for 1997.

In 1998, Bruske split time between the Padres, Dodgers and Yankees. He got into a total of 42 games between the three teams, with a 3.45 ERA.

Bruske then underwent Tommy John surgery. He then returned for 2000 with the Brewers. He then got Milwaukee's first victory of the year. In that game, Bruske got a key out by getting Ken Griffey Jr. to ground into a fielder's choice, The Milwaukee Journal Sentinel wrote.

"You can't let him beat you there," Bruske told The Journal Sentinel. " I wanted to make him hit my pitch. It was a sinker away."