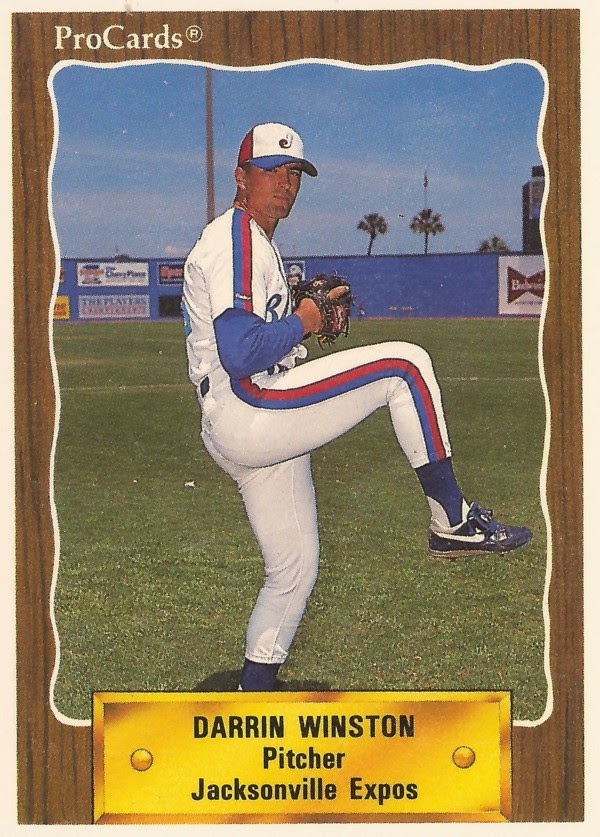 It took Darrin Winston more than nine years to make the majors. Along the way, he sat out a season to injury, didn't play in another then almost got released months before he made his big league debut.

Then, when the pitcher finally made it, he threw a gem. In his first major league start, Winston went seven innings, giving up a single hit and a single unearned run, The Allentown Morning Call wrote.

"This one was for all the people who told me to never give up, to keep at it," Winston told The Morning Call after that first start. "It really is a dream come true. You can't find a better ending to my story."

Winston's story would go on to include another season with time in the majors and four seasons of independent ball with the Somerset Patriots in his home state of New Jersey.

Winston's story, though, would ultimately have the saddest of endings. In August 2008, not long after being diagnosed with leukemia, the married father of six and grandfather of one passed away. He was 42 years old.

Winston's professional baseball story began in 1988, taken by the Expos in the 18th round of the draft out of Rutgers.

Winston started at short-season Jamestown in 1988. He made AA Jacksonville in 1990, then AAA Indianapolis. He missed all of 1992 to injury.

He returned in 1993 and stayed with the Expos system through 1994 without making Montreal. He played at AAA with the Pirates then sat out all of 1996.

For 1997, Winston returned with the Phillies, playing the year at AAA Scranton. He then made Philadelphia.

In seven outings, one start for the Phillies, Winston gave up seven earned in 12 innings of work. He gave up all seven of his earned runs in two relief outings, four in his debut.

He then came back for 1998, getting 27 relief outings. He ended with a 6.12 ERA and one save. His save came in late April, Winston pitching the 10th inning.

Winston also made the Phillies' Opening Day roster. There for the big occasion was his wife and family, The Philadelphia Inquirer wrote.

Winston's final major league game came that June. For 1999, Winston moved to the independent Patriots. He continued with the Patriots through 2002. Winston went on to coach youth baseball.

Then, in August 2008, Winston was diagnosed with leukemia. He passed away Aug. 15. Winston was remembered after his passing as a family man, a man of faith and as a ball player, according to The Edison Sentinel.

"He was very introspective, very selfaware, very confident," Winston's old high school coach Michael Wolfthal told The Sentinel. "But he was, you know, a team kid; the team always came first with Darrin. He cared very much about his teammates, his friends. He married his high school sweetheart. What can we tell you — if there's 'all- American boy' in the dictionary, his picture is next to it."
1990 Minor League Tally
Players/Coaches Featured:1,583
Made the Majors: 774 - 48.9%-X
Never Made Majors: 809-51.1%
5+ Seasons in the Majors: 335
10+ Seasons in the Minors: 198
Posted by Steve78 at 2:51 PM