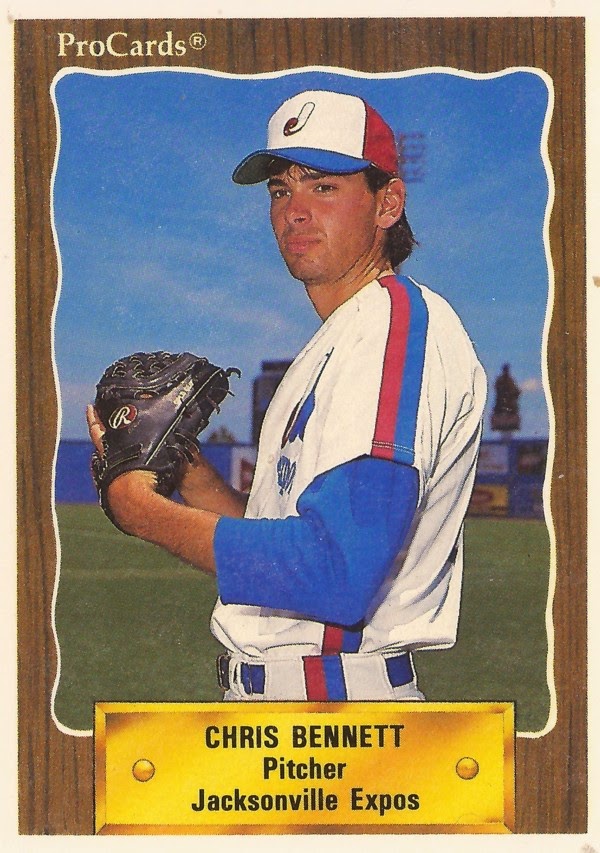 Chris Bennett had a good year in 1989 and he was rewarded by making the Montreal Expos winter roster.

While Bennett made the Expos winter roster that November, he never did make a big league club's in-season roster. In nine professional seasons, Bennett made AAA, but he never made the majors.

Bennett's career began in 1986, taken by the Phillies in the seventh round of the draft out of Cal State Sacramento.

With the Phillies, Bennett played just a single season, getting time between single-A Spartanburg and Clearwater. In 23 outings, four starts, he had a 4.12 ERA. He went three innings in a June game, giving up four earned.

Bennett isn't recorded as playing in 1987, one of four years during Bennett's career where he didn't play.

He returned with the Expos for 1988, playing between the rookie Gulf Coast League and single-A West Palm Beach. In 24 outings, Bennett had an ERA of 1.45.

Bennett played 1990 between Jacksonville and AAA Indianapolis. He got 60 relief outings on the year, with a 3.92 ERA and 12 saves. He then got 34 outings between the two levels in 1991.

Bennett is next recorded as playing briefly back with Indianapolis in 1993 with the Reds. He got three outings then. After skipping 1994, Bennett played 22 games with the Pirates between AA Carolina and AAA Calgary.