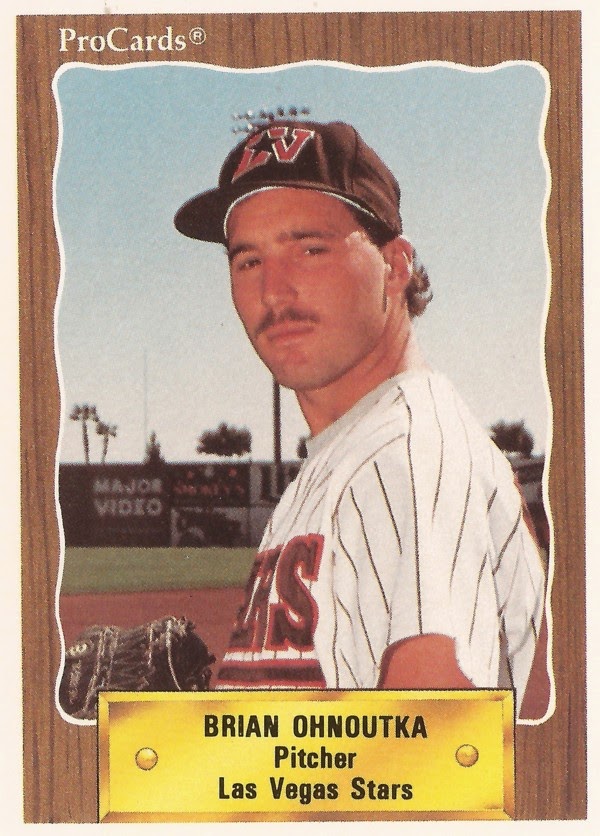 Playing for the California League's Fresno Giants in August 1985, Brian Ohnoutka did well in his first four innings. He hadn't given up a hit, The Modesto Bee wrote.

And he wouldn't give up a hit that day. That's because he got ejected.

After hitting a batter in the fourth, Ohnoutka came up in the top of the fifth. A close pitch from the opposing hurler sent Ohnoutka racing to the mound and, no-hitter or no no-hitter, Ohnoutka was promptly tossed, The Bee wrote.

Ohnoutka was in his first professional season that year in the Giants organization. He went on to play six seasons professionally, getting as high as AAA, but never making the majors.

The Giants selected Ohnoutka high in that June's draft, taking him in the second round, out of Texas Christian University. In three seasons at TCU, Ohnoutka amassed 18 complete games, still third on the TCU all-time list.

With the Giants, Ohnoutka opened with short-season Everett. He pitched two games with Everett. In one of them, Ohnoutka walked in two runs. But he soon advanced to single-A Fresno.

At Fresno, Ohnoutka went 7-2 with a 2.52 ERA, including that four-inning outing in August.

Ohnoutka moved up to AA Shreveport for 1986, spending two full seasons there and part of a third. He went 7-9 his first year and 9-11 his second.

In 1988, Ohnoutka saw his first time at AAA, starting 15 games for Phoenix. It was his last year with the Giants system. He went 1-8 for the Firebirds, with an ERA north of 5.

Two more games that year with the Angels at AAA Edmonton and Ohnoutka was done, short of the majors.