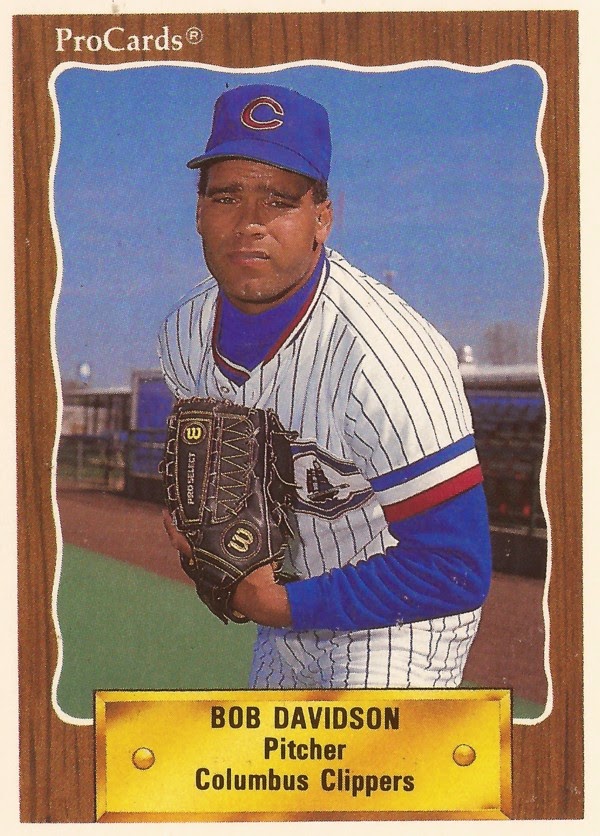 As the skies threatened, Bobby Davidson started from the bullpen and on his way to his second major-league appearance this day, July 16, 1989.

''They told me to go get 'em," Davidson told The New York Times later, "so I grabbed my jacket and started out there. The guy opened the gate, and there I was, standing in front of New York.''

Also still standing in front of New York was the Yankee starter. Manager Dallas Green left him in, the Yankees up 10-1. Back in the pen, Davidson was poised to come in, when needed. Davidson's services ended up not being needed at all that day. Those threatening skies opened up, the game was called mid-seventh.

Those rains not only helped shorten that game. They also helped shorten Davidson's career. Soon after, Davidson was sent back down to AAA Columbus. His professional career ending two seasons later, never completing that second trip to a big league mound.

Davidson's career began in 1984, taken in the 24th round of the draft, out of East Carolina. He played that year and the next at short-season Oneonta. The reliever posted a 3.45 ERA his first season and a 2.50 mark his second.

Davidson first made AA Albany-Colonie in 1986 then first saw AAA Columbus in 1988. In May 1989, Davidson was back at Albany, going three innings in relief against New Britain, getting the win. He soon returned to Columbus, going 3-0 with a 0.83 ERA in 33-plus innings, according to The Associated Press.

On July 15, Davidson got his call-up to the Bronx. Later that day, he made his debut against the Royals. Davidson got into the game in the ninth, his Yankees already down 5-1.

By the time the ninth was over, his team was down 7-1. George Brett added another home run to his Hall of Fame credentials, at Davidson's expense.

He warmed up that next game, didn't get in then was sent down. Davidson continued to do well at Columbus. In early September, he earned International League Player of the Week honors, going 2-0 on the week. He also finished the season with Columbus 8-5 with a 1.83 ERA.

Davidson returned to Columbus for 1990, going 5-8 on the year with a 3.37 ERA and five saves. It was his last year with the Yankees system. In 1991, Davidson pitched for the Cardinals at AAA Louisville. He went 3-5 with a 4.29 ERA in 51 appearances, his final appearances as a professional.

Davidson went on to other careers, The Times wrote years later in 1999. He became a chimney sweeper then, by 1999, worked in computers in Cincinnati.

Also, The Times wrote, not only did he not return to the Yankee Stadium mound, he also never returned to Yankee Stadium. The trip was too expensive.

''Sometimes I think about it, it almost feels like a dream,'' Davidson told The Times of his brief major league career.