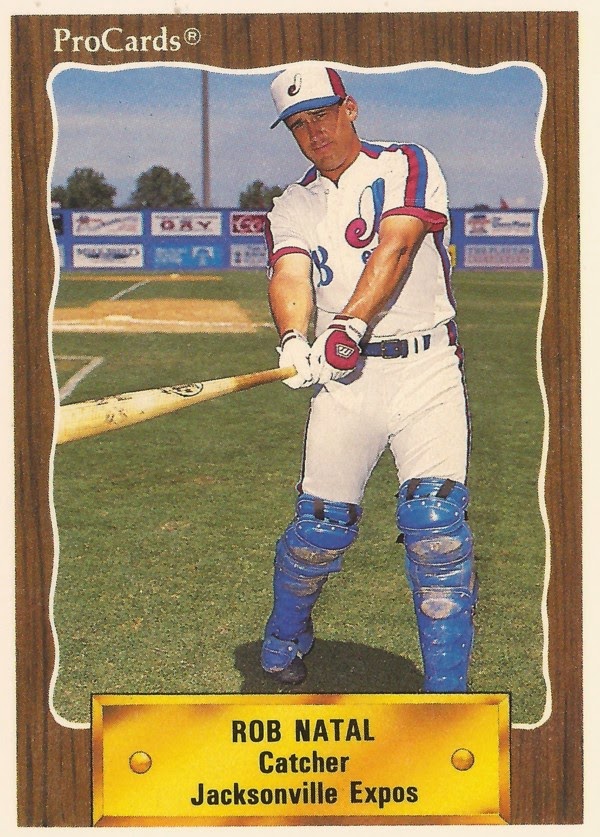 Bob Natal hit a home run in this August 1995 game, his first in the majors in two years. That home run, along with a two-run double, helped Natal's Marlins to their fifth-straight win.

This was also Natal's first game with the club since being called back from a stretch the minors, The South Florida Sun-Sentinel wrote.

"The biggest relief I had today was that we kept the winning streak intact," Natal told The Sun-Sentinel afterward. "I didn't want to come in and disrupt anything."

Natal was in his fourth season with time in the majors that year. He got into two more. He's also gone on to a career in coaching.

Natal's career began in 1987, taken by the Expos in the 13th round of the draft out of the University of California San Diego. Natal is sometimes referred to as Rob Natal.

Natal started at short-season Jamestown. He made AA Jacksonville in 1989, then AAA Indianapolis in 1991.

In 1992, the catcher debuted in the majors. He got five games with the Expos that July, getting six at bats without giving up a hit.

In June, as it appeared he'd get his call, Natal told The Los Angeles Times he was looking forward to making it with the Expos, or some other team.

"I like where I am right now," Natal told The Times. "But I'll be disappointed if I don't get called up. I know there's a lot of clubs that could use a catcher that can hit and play good defense."

As it turned out, the new Florida Marlins were looking for someone like Natal. The club picked him up in that November's expansion draft.

Natal made Florida for 41 games in 1993. He hit .214 with one home run. That home run ended up being his first major league hit. It came off John Smoltz. He also got two other hits in that game.

He continued playing in the minors in 1998. He then turned to coaching. By 2004, he was in the majors, serving as bullpen coach for the Expos.

In November 1998, Natal spoke to The Sun-Sentinel about his move to coaching.