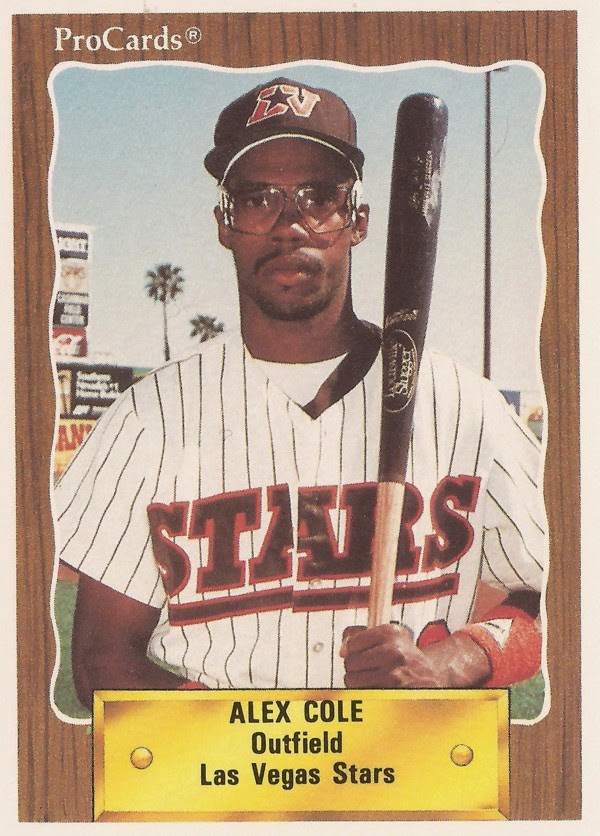 Alex Cole stole eight bases in his first eight big league games, something that would be accomplishment enough for any player.

Cole, though, did it in grand fashion, picking up his eighth big league stolen base in the same game in which he picked up his fourth: Barely up a week, on Aug. 1, 1990, Cole stole five bases in a single game.

"Speed is something to behold," Indians manager John McNamara told The Associated Press after that game. "It's beautiful to watch when it's on your side. The reports on him every place he's been have been very good. We're going to give him every opportunity to play."

Cole stayed with the Indians and he continued to steal bases. By the end of the year, he'd gotten into 63 games and stole 40 total bases.

He went on to play in seven total seasons in the majors. Cole, though, couldn't match his theft output of that first season. He stole in double digits for four more seasons, but never more than 30.

Cole's career began in 1985, taken by the Cardinals in the second round of the January draft out of Manatee Junior College.

Cole got his first look at AAA the next year in 1986 at Louisville, getting there permanently in 1988. Cole started 1990 with the Padres at AAA Las Vegas after a trade. Another trade landed Cole in July with the Indians, and got him to the majors.

By mid-August, Cole's steal count had hit 16. Cole told The Toledo Blade he saw his job as getting on base, then drawing the pitcher's attention to him.

Cole returned for 122 more games with the Indians in 1991. He hit .295 with 27 stolen bases. Cole started 1992 with the Indians, then moved to the Pirates mid-year in another trade.

In Pittsburgh, Cole hit .278 the second half, stealing just seven bases. In the NLCS, he went 2 for 10 with no steals.

"It felt great to hit one, especially in a win," Cole told The AP after that first homer. "But it wouldn't bother me if I never hit another one. They don't pay me to hit home runs."

Cole played parts of just two more seasons, 28 games in 1995 with the Twins and 24 final contests with the Red Sox in 1996, ending his major league career. He finished 148 total big league steals.

Cole, though, continued playing in the minors and independent leagues through 2001, playing his final three seasons at independent Bridgeport.