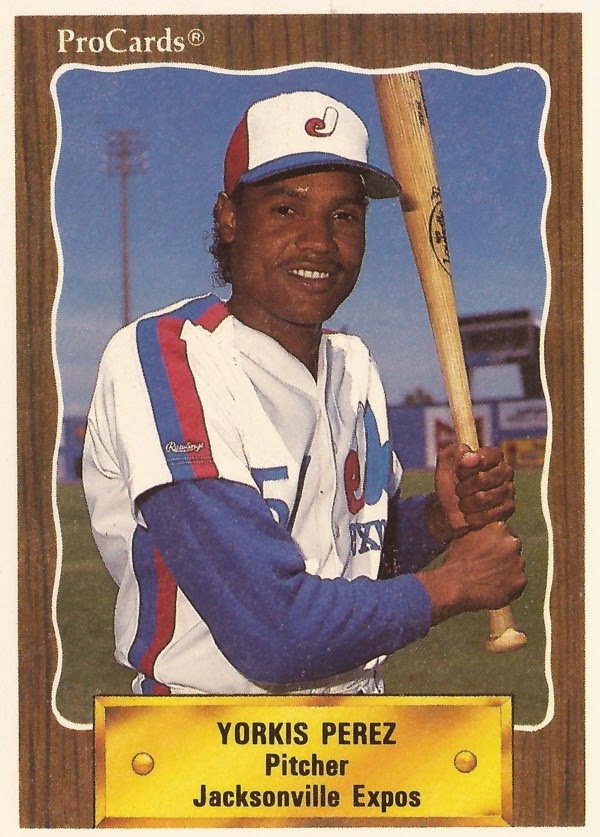 Yorkis Perez was nearing the end of his career in 2000. But he still could stake his claim to the plate.

Pitching against the Cardinals for Houston that April, Perez pitched Jim Edmonds inside, brushing him back. Perez then proceeded to strike Edmonds out looking, according to The Associated Press.

"I think part of the problem we're having is their hitters were too comfortable," Perez told The AP of the strong Cardinals start. "I wanted to claim my part of the plate."

Perez was in his eighth season with time in the majors that year. He got one more. By the time he was done, the career reliever had gotten into a total of 337 major league games, with a career ERA of 4.44. He also spent time in Japan.

He also returned to the majors for one final season, after losing his mother and sister in a November 2001 plane crash.

Perez' career began in 1983, signed by the Twins as an amateur free agent out of his native Dominican Republic at the age of 15.

Perez is recorded as getting his first playing time at rookie Elizabethton in 1983 and 1984, getting four outings between them. He made single-A Kenosha in 1986. He then moved to the Expos and AA Jacksonville in 1987.

Perez stayed with the Expos through 1990, making AAA Indianapolis briefly in his final season. He moved to the Braves and AAA Richmond for 1991. Late in the season, he was traded to the Cubs. He also made his major league debut.

Perez got three September appearances, giving up one earned over 4.1 innings of work. For 1992, he moved to Japan and Yomiuri. Perez got three more outings there. In 6.1 innings, he gave up five earned.

"Justice was looking for something outside, so I jammed him inside," Perez told The AP. "When he first hit it, I thought it was going to fall in."

Perez moved to the Astros in a trade before the 2000 season. He got 33 outings for the Astros that year, with a 5.16 ERA. His final major league season came in 2002, 23 outings with the Orioles.

Perez came back for that final season, after losing his mother and sister Nov. 12, 2001 on American Airlines Flight 587, which crashed after takeoff from JFK in New York. It was bound for the Dominican Republic, according to The Baltimore Sun.