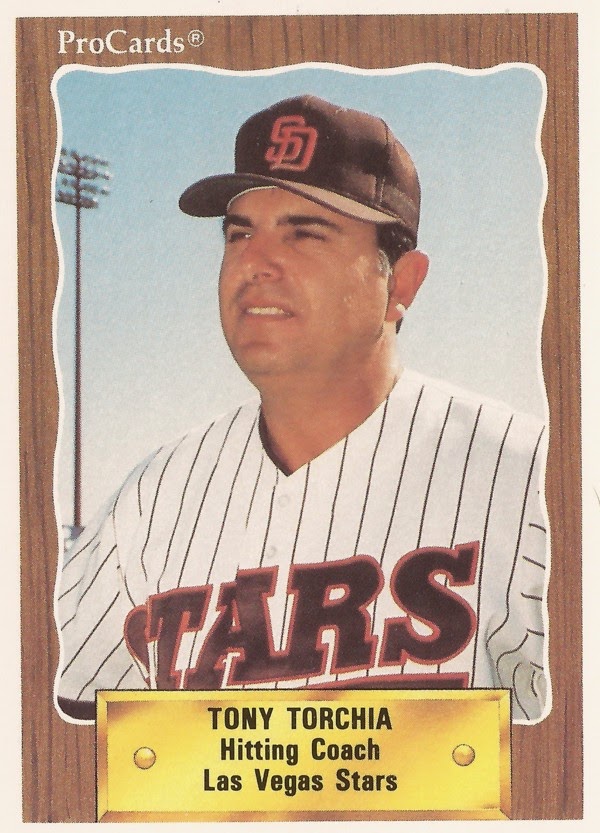 Managing AAA Pawtucket in 1983, Tony Torchia had the occasion to send his share of players to the big leagues.

Torchia told The Patriot Ledger News Service that sending them up was his way to thank the players for the job they did for him.

"To see them later, in the big leagues, is like a school teacher who sees a student come back to visit and he sees he's doing well," Torchia told the news service that May. "When I see the big leaguers I've managed, I get a good feeling."

Torchia was in his eighth season as a manager in the minors, 21st in the minors overall. Torchia played 13 seasons as a first baseman and outfielder, never making the majors.

Torchia's coaching career went on through 2003, making the majors for one season, in 1985, a season that didn't end as Torchia had hoped.

More recently, Torchia has worked to spread the game of baseball to other countries, with Major League Baseball International.

Torchia's long career in baseball began in 1962, signed by the Dodgers. He played one season in their system before moving to the Red Sox organization and starting a long affiliation with them.

He also made AAA for the first time that season, where he would largely stay through the end of his playing career in 1974.

By 1976, Torchia was managing, at the Red Sox single-A team in Winston-Salem, winning the league championship his first year. Two years there and Torchia moved on to AA Bristol.

In 1979, Torchia was coaching future Hall of Famer Wade Boggs at Bristol. In May, Torchia watched his team take a double header from Reading, one on a bad throw on a ball hit to the pitcher.

"He threw it flatfooted and it got away from him," Torchia told The Reading Eagle of the play. "Young pitchers concentrate so much on the hitters that they don't work on other things."

Torchia stayed at Bristol through 1982, winning league titles in 1978 and 1981. He then joined AAA Pawtucket as manager for 1983. He spent two seasons at Pawtucket, winning the league title in 1984.

Torchia made Boston as bullpen coach for 1985. Torchia, though, wasn't brought back to the big league staff for 1986. He later sued the club, alleging the club illegally fired him for seeking therapy, The Associated Press wrote.

Nonetheless, Torchia returned to the minors for 1986, managing with the Red Sox back at AA New Britain. He joined the Padres system for 1987, helming single-A Charleston, SC.

At Charleston, Torchia's team saw a game lost by errors. The team had lost his fundamentals, Torchia told The Charleston Post/Courier.

"We couldn't throw strikes and we couldn't catch a routine fly ball and we couldn't get a sign, so we didn't deserve to win," Torchia told The Post/Courier. "You can't make the mistakes we did and expect to win."

Torchia went on to serve as hitting coach at AAA Las Vegas, then Colorado Springs and New Orleans. He then spent two final seasons as a manager, at high-A Brevard County in 2002 and at independent Mid-Missouri in 2003, where he was let go mid-season.

"The players always come first to me," Torchia told The Columbia Daily Tribune of his managerial style, speaking after his 2003 firing. "Not just their progress as a player but their well-being around the clock, because they’re a long way from home, and they have parents who worry and think about them all the time."