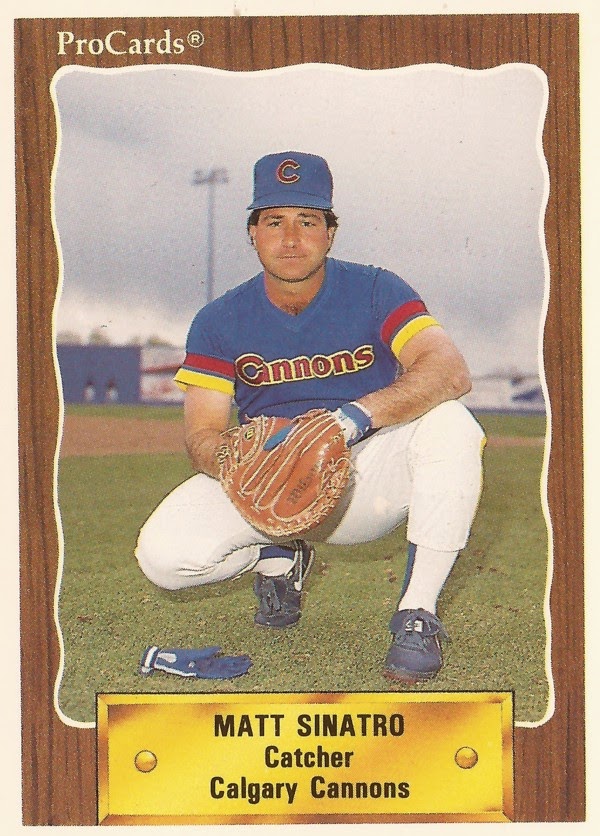 Starting the season with Atlanta in 1984, Matt Sinatro got into two games, going 0 for 4. Then, in late April, Braves manager Joe Torre came to him. The Braves had traded for another catcher. Sinatro was being sent down.

"Everybody has setbacks," Sinatro told a group of developmentally disabled athletes the next January, according to The Rome News-Tribune. "When you cry, nobody cries with you. I tried not to let it get the best of me. I wanted to improve myself and not give up.

"A select few get a million dollars," Sinatro told the group. "There's a lot of pressure. It's a very tough occupation, but it's worth it."

It wasn't the first time Sinatro was sent back down and it wasn't the last. Sinatro's major league career included time in parts of 10 seasons, never playing in more than 37 games in any single year.

And, since last playing a game in 1992, Sinatro's career has continued, first as a scout, then as a coach for the Mariners, Devil Rays and Cubs, under manager Lou Piniella.

Sinatro's professional career began in 1978, taken by the Braves in the second round. He made AA Savannah in 1980 and AAA Richmond in 1981. His major league debut came in September 1981. He played in 12 games for the Braves, hitting .281.

He returned to the Braves for 1982, playing in what would be his career high 37 games. In 81 at bats, he would only hit .136. He would also hit one home run, in an August game against the Mets. It would turn out to be the only home run he would hit in his career.

That year in 1982 was also the year the Braves started the season 13-0. Sinatro played a pivotal role in the 13th win, that role was getting hit by a batted ball. Automatically out, Sinatro still prevented a sure game-ending double play.

"That's what happens when you're hot," Sinatro told The Associated Press after the game.

Sinatro's career would include at least two other late-inning heroics, one of them also unconventional.

In 1989, Sinatro played 13 games for the Tigers. Then he joined the Mariners for 1990. He played 53 games over his final three seasons, all with Seattle. Sinatro's third late-inning heroic came in July 1990 with a walk-off walk against Milwaukee.

"When I got into the batter's box, I tried to remember that this was like any other at bat," Sinatro told UPI after the game. "I just tried to concentrate and tune out the crowd."

His playing career over after 1992, Sinatro joined the Mariners as an advanced scout for two seasons then became a bullpen coach for 1995. Sinatro followed Piniella to the Devil Rays for 2003 then to the Cubs in 2007.

In August 2007, Sinatro got into a dust-up with his manager, with Piniella caught on camera yelling at his first base coach Sinatro. But the incident was nothing compared to a time in Seattle when they head-butted, Sinatro told The Chicago Tribune.

"When you've worked together a long time, you're going to have a lot of (disagreements)," Sinatro told The Tribune. "It wasn't a big deal at all."