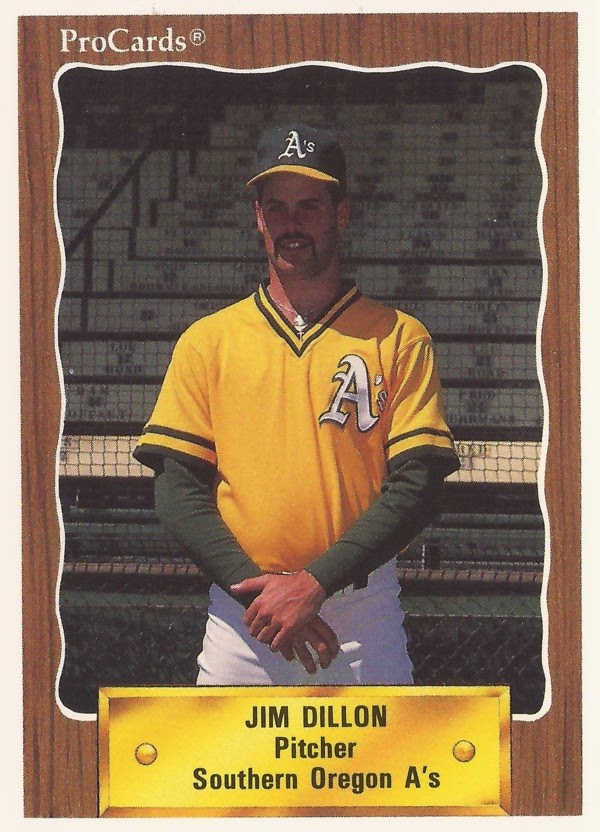 Drafted after his junior year, Jim Dillon decided to stay in school. He wanted to improve himself, and improve his draft position come 1990, according to The Bangor Daily News.

That's what he went out and did. His 9-3 record and 3.00 ERA for the University of Maine that year got him taken in the 14th round by the Athletics.

"It has all worked out well," Dillon told The Daily News. "I've always wanted the opportunity and now I have a chance to capitalize on that opportunity."

Dillon went on from there to play in three professional seasons. He made it to high-A Modesto, but he couldn't make it higher.

Dillon came out of Maine as the school's top starter for 1990. In March 1988, Dillon was credited with taking his team to an upset win over Miami. At the same time, he kept himself in the rotation.

"I started off slowly this spring," Dillon told The Lewiston Journal after that victory, "but I've been getting better. Tonight everything clicked. I was spotting the fastball, and my slider was working pretty decent."

By draft time 1989, the Braves had their eye on Dillon. Atlanta took him in the 34th round, but he did not sign. Instead, the reliever came back for his 1990 season with Maine.

For 1990, Dillon moved to starting. By May, though, injuries to the Maine relievers pushed him back into that role for the NCAA regional, according to The Daily News. He came in and shut down Iowa over 1.1 innings.

"I know what Coach wants and I agreed with him," Dillon told The Daily News. "Pressure situations are good. I like coming in in situations like that. You either have guts to do it or you don't. I do."

He moved to single-A Madison for 1991. There, he was used almost exclusively in relief. He got 28 outings, one start, with a 1.69 ERA. He also picked up three wins and seven saves.