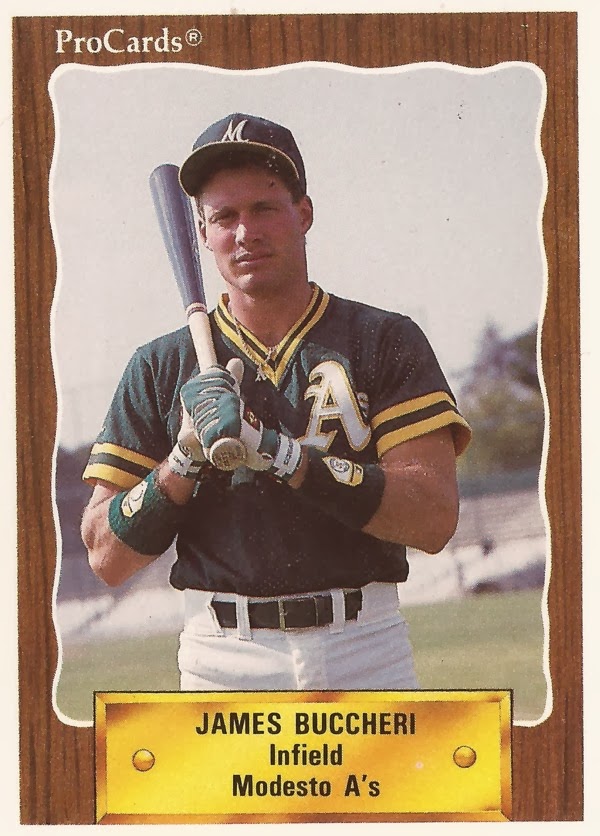 James Buccheri took off at Golden West College in 1988, literally.

With the encouragement of his coach Fred Hoover, Buccheri focused on breaking the school record for steals, which stood at 35. By late March, he was on his way to doing just that, according to The Los Angeles Times.

"Last season I would get the sign to go, but a lot of times I was afraid I couldn't make it, so I wouldn't," Buccheri told The Times. "This season I just have a lot more confidence that I can make it."

Buccheri ended up swiping 46 bases for Golden West that year. He also turned pro that summer. In the pros, Buccheri continued running, stealing nearly 400 bases over 13 seasons as a pro. Buccheri, though, never got to attempt a steal in the majors.

Buccheri's career began that year in 1988, taken by the Athletics in the 24th round out of Golden West.

At Golden West, Buccheri stole those 46 bases. He also hit .444 and tried out for the U.S. Olympic team. After failing to make the team, Buccheri chose the Athletics over Cal State Fullerton, according to The Times.

Buccheri played his first year with the Athletics at short-season Southern Oregon. He hit .289 over 58 games. He also stole 25 bases.

By August 1994, Buccheri was in the midst of his seventh season as as pro. He was hitting .304 and swiping 32 bases. He was also still playing at AAA, and getting frustrated, according to The Times.

"I want to go to a team that will give me a chance to play in the big leagues," Buccheri told The Times. "I feel I've shown I can play at that level."

Buccheri continued playing in the minors through 2000, playing in the Devil Rays and Mets systems. He also played in Mexico. He never made the majors.

Buccheri then went to Italy. He's credited as playing in Italy over the next decade. Most recently, he's credited with 12 games with Rimini. Buccheri also played for Italy elsewhere, making the roster of the 2004 Italian Olympic team and the 2006 World Baseball Classic.