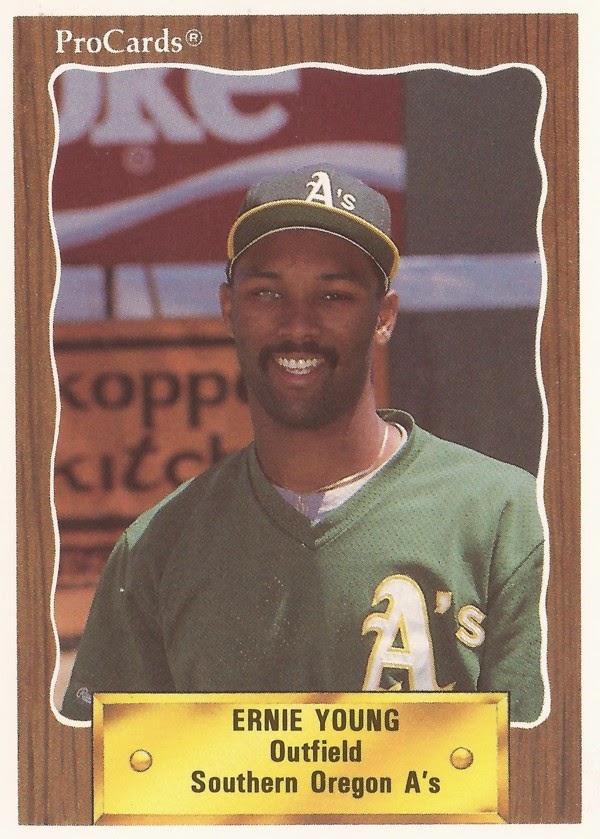 Ernie Young wasn't a traditional leadoff hitter for the Athletics in 1996. Young's game was not so much speed, but it was power.

His manager Art Howe was fine with that, according to The Associated Press.

"Getting that power out of the No. 1 spot is a real plus for us," Howe told The AP that May. "He showed us he could do it in the spring. He was off to a little bit of a slow start power-wise with the season started, but the past week to 10 days, he's been outstanding."

Young took the Oakland leadoff spot in his seventh professional season, his third with time in the bigs. He went on to play in eight big league seasons and one in Japan. His 1996 season would be his most successful.

Young's career began in 1990, taken by the Athletics in the 10th round of the draft, out of Lewis University in Illinois.

He started at short-season Southern Oregon, hitting .280 with six home runs. In an August game, he went 3 for 3, scoring four runs.

Then, in spring 1996, Young earned his spot at the top of the Oakland lineup by hitting well. In one spring game, he hit two home runs. "I think I've opened some eyes," Young told The San Francisco Chronicle.

Young ultimately got into 141 games for the Athletics that year. He hit .242, with 19 home runs, but he stole just seven bases.

He returned to Oakland for 71 games in 1997.He then got into four more major league seasons from 1998 to 2004, but that time consisted of just 39 total games in the bigs.

In the meantime, Young continued playing in the minors and elsewhere. In 2000, the 31-year-old minor leaguer found himself on the U.S. Olympic team with young prospects. The team unexpectedly won the gold. In 2002, Young played in Japan with the Yokohama Bay Stars.

His playing career over, Young returned to the minors as a manager. He's last recorded as managing in 2012 at single-A West Michigan.

In 2006, on the occasion of his 300th minor league home run, Young told Baseball America why he still played.