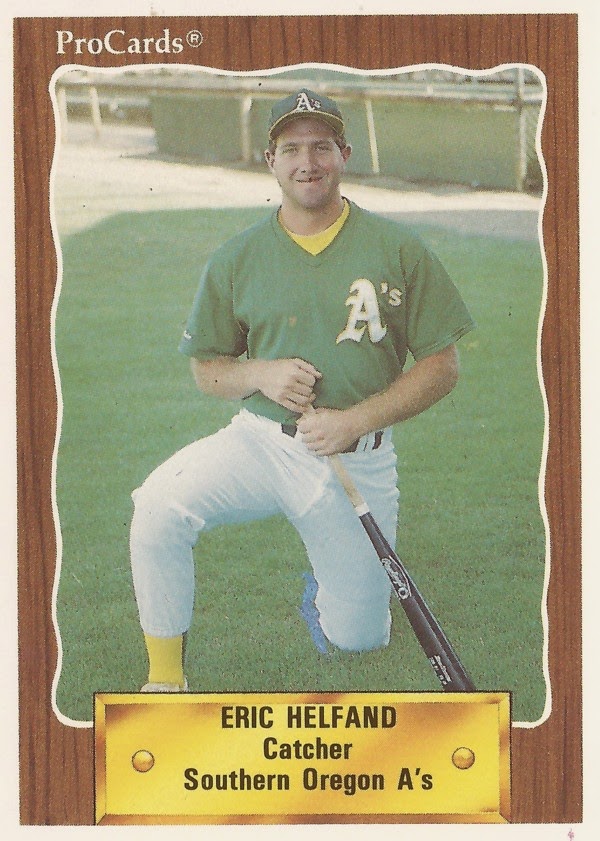 Eric Helfand's high school coach knew his catcher was something special by the way he threw, according to The Los Angeles Times.

"He has a great throwing arm, and the beauty of it is that he gets rid of the ball so quickly," Patrick Henry High Coach Bob Imlay told The Times in May 1987. "He's shut down many a running game this season."

Helfand went on to shut down running games at Arizona State University and in the pros. In the pros, he got to try his hand at keeping those running games under control in the majors in parts of three seasons. In all, he made the bigs for 53 games, his last coming in 1995.

Helfand's pro career began in 1990, taken by the Athletics in the second round of the draft out of Arizona State.

With the Athletics, Helfand started at short-season Southern Oregon. He hit .285 over 57 games. He also caught some of the Athletics' top pitching prospects.

Then, in September 1993, Helfand got his first call to Oakland. Helfand got into eight games, hitting .231. He then returned to Oakland for another seven games in 1994, hitting .167.

It was in 1995 that Helfand got the bulk of his big league playing time. In 38 games, he hit .163. But he also worked with young pitchers. In July, he caught hurler Ariel Prieto's major league debut.

That season was also Helfand's last in the Athletics organization. He moved to the Indians and AAA Buffalo for 1996, then the Padres and AAA Las Vegas for 1997. He's last recorded as playing in 1998, with two games at AAA Vancouver with the Angels.

In June 1997, for Las Vegas, Helfand went 5 for 5, with a home run, three doubles and five RBI, helping the Stars break out of a slump, according to The Las Vegas Sun.