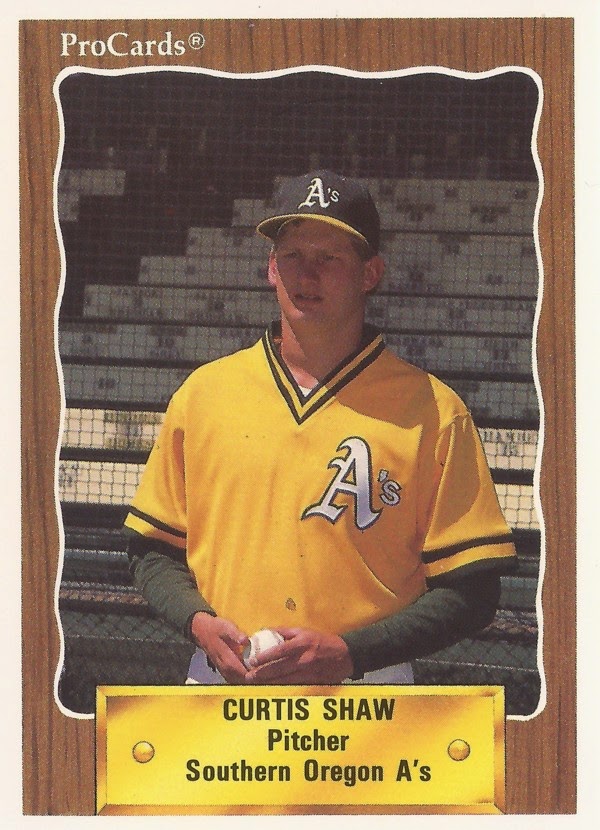 Curtis Shaw was hardly noticed when he arrived at the University of Kansas. Upon leaving, he got plenty of notice.

That's because the formerly unheralded hurler found himself not only drafted, but taken 36th overall by the Athletics.

"To go from somebody being a walk-on, somebody not recruited, to 36th pick is hard to believe," Shaw told The Lawrence Journal-World after his selection in June 1990. "I owe a lot to coach (Dave) Bingham. He saw something in me. He gave me a chance to pitch."

From that chance to pitch, Shaw went on to a professional career that spanned nine seasons. He made AAA in four of those seasons, but he never made the bigs.

At Kansas, Shaw matured with time. By May 1990, nearing the end of Shaw's junior year, it was apparent that scouts were noticing, according to The Journal-World. By mid-May, Shaw had a conference-leading 10 wins and an 89 mph fastball.

"It's a fairly tale story," Bingham told The Journal-World in May. "He went from a walk-on to somebody who is going to be a very high draft choice."

With the Athletics, Shaw was assigned to short-season Southern Oregon. In 17 outings, nine starts, Shaw went 4-6, with a 3.53 ERA. In a late-August start, Shaw went seven innings, giving up one earned, but took the loss.

''I guess you could say he's been a tough-luck pitcher,'' Huntsville manager Casey Parsons told The Orlando Sentinel that June of Shaw. "When he's got his good stuff, we don't hit. If he keeps it close, we let it slip away. He's just hit a string of bad luck."

But he came back and won those six. In a late-July game, his second win of the year, he even pushed a no-hitter into the seventh inning.