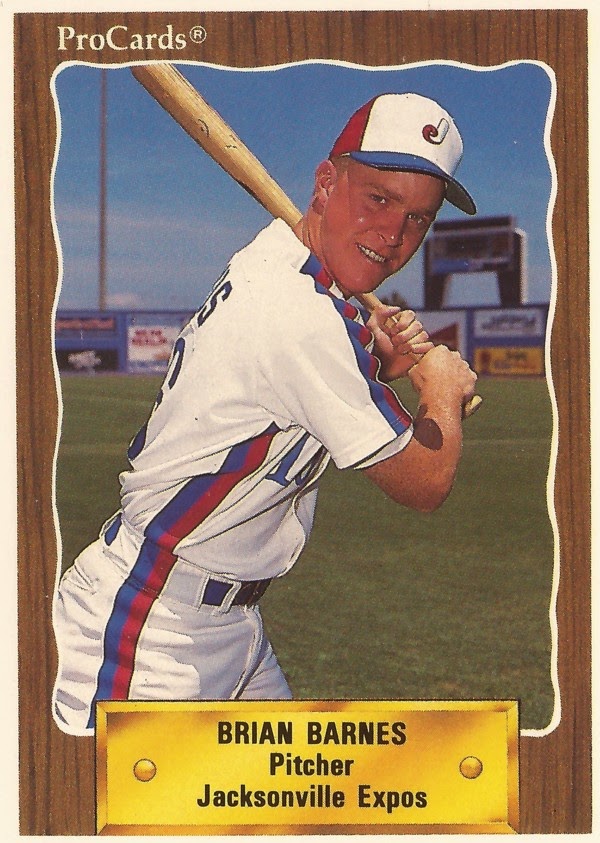 Brian Barnes was all of 5 feet, 9 inches tall. His height was enough to give some scouts pause, but not all, he told The South Florida Sun-Sentinel in 1991.

"I had a scout that wasn't afraid to take a chance on me because of my height," Barnes told The Sun-Sentinel that spring. "He looked past the height and velocity and looked to the heart. I have as big a heart as anybody and that's what really matters most."

That chance paid off, and quickly. Selected by the Expos in the fourth round of the 1989 draft. By September 1990, Barnes was in Montreal and he would go on to play parts of five seasons in the majors.

Barnes hit three levels his first year alone, even getting one start at AAA Indianapolis. At short-season Jamestown, Barnes went 1-0 in two starts, at single-A West Palm Beach, he went 4-3 in seven starts, but also had a 0.72 ERA. In one early August outing for West Palm Beach, Barnes struck out 15.

"I haven't had any trouble working ahead in the count or throwing my offspeed stuff for strikes," Barnes told The Sun-Sentinel of his time in West Palm Beach. "I've had good command here (and) if I can keep my walk-to-strikeout ratio down, I'll have success."

He started 1990 at AA Jacksonville, going 13-7 with a 2.77 ERA, earning a September call-up to the big club. In his major league debut, Barnes went seven innings, giving up two runs.

Barnes returned to the Expos for 1991, starting 27 games for Montreal. He went 5-8, with a 4.22 ERA. In late August, no-hit the Reds through four, then gave up five runs in the fifth for the loss.

Barnes was still a starter in 1992, going 6-6, with a 2.97 ERA for the Expos that year. In late June, Barnes got into the ninth, giving up five hits against the Pirates. That July, Barnes went into the ninth again, giving up three hits.

After the June outing, Expos Manager Felipe Alou was impressed.

"The rap in the past against Barnes was that he couldn't get his fastball over," Alou told The Associated Press. "Today he had that sinking fastball. Before, he just had a straight fastball."

For 1993, Barnes switched to largely relieving, getting into 52 games. For 1994, Barnes pitched in six games for the Indians and another five with the Dodgers, ending his major league career.