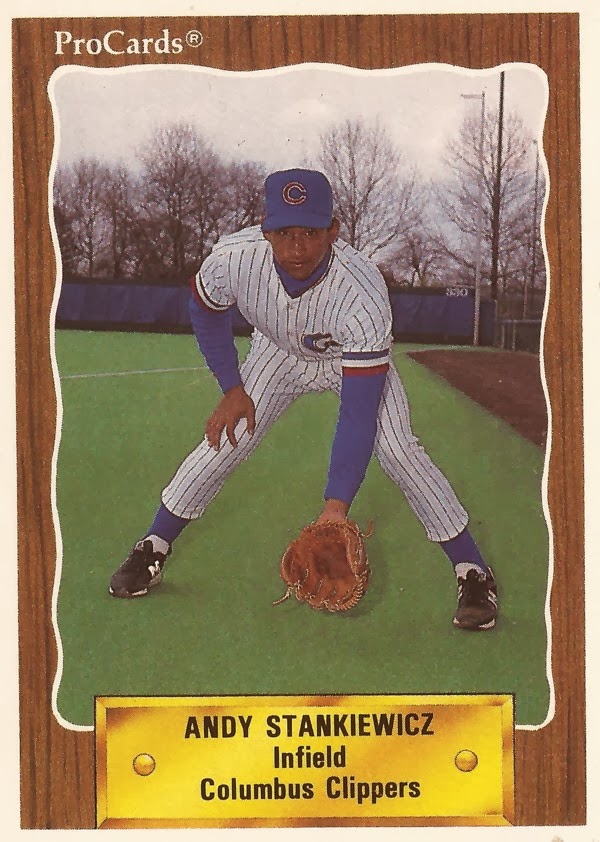 Coming off a season where he played more than 100 games on the Yankee infield, hitting .268, Andy Stankiewicz found himself still fighting for a spot on the big club for 1993.

Stankiewicz just hoped he wouldn't become the insurance policy again back at AAA, he told The South Florida Sun-Sentinel that spring.

Stankiewicz did get back. But he never got back with the kind of playing time he saw in 1992. He went on to play in seven major league seasons, never playing in more than 77 games in any other season.

His playing career over, Stankiewicz has gone on to a long post-playing career in the minors and in college, most recently serving as head coach at Grand Canyon University in Arizona for 2012.

Stankiewicz' career began in 1986, taken by the Yankees in the 12th round, out of Pepperdine University.

He played that first year at short-season Oneonta, hitting AA Albany in 1988 and getting a look at AAA Columbus that same year.

Stankiewicz, though, didn't make the majors until that year in 1992, with the Yankees. His debut came at the age of 27, making himself the go-to guy when the Yankees needed someone to fill in.

"I knew I was a longshot to make the team going into spring training," Stankiewicz told The Hartford Courant that April. "What I wanted to show the Yankees in camp was that I could help them sometime down the road."

Stankiewicz ended up helping the Yankees in a total of 116 games that summer. He hit .268, knocked in 25 runs and stole nine bases.

Starting the next spring, Stankiewicz had a hot start, hitting .364, The New York Times wrote. But he was trying to make a team where the health problems of the year before seemed to be ended.

"It's not something I can worry about," Stankiewicz told The Times of his competitiors. "All I can control is my attitude and performance. I have to try and make the decision tough on them."

Stankiewicz, though, got into just 16 games for the Yankees that year, getting nine at bats without a hit. That off-season, Stankiewicz was traded to the Astros.

In August 1997, Stankiewicz hit one of three consecutive home runs for the Expos. The home run was just his fourth of his career. "I don't hit that many so I can't tell you when I hit it if it was out," Stankiewicz told The Associated Press afterward.

Stankiewicz played one more season, getting into 77 games with the Diamondbacks in 1998, ending his big league career. He played three more seasons, though, in the minors, ending his career in 2001.

By 2003, Stankiewicz was managing back in the Yankees organization, at short-season Staten Island. By 2007, he was an assistant coach at Arizona State University and in 2010 a coordinator for minor league instruction with the Mariners.

For 2012, Stankiewicz is starting his first year as head coach at Grand Canyon University. Going into his first campaign, he explained his approach to GCULopes.com.

"We are trying to emphasize a style of play that is going to be evident when we take the field this week," Stankiewicz told GCULopes.com in February 2012. "We want to be a high energy, fundamentally sound club."