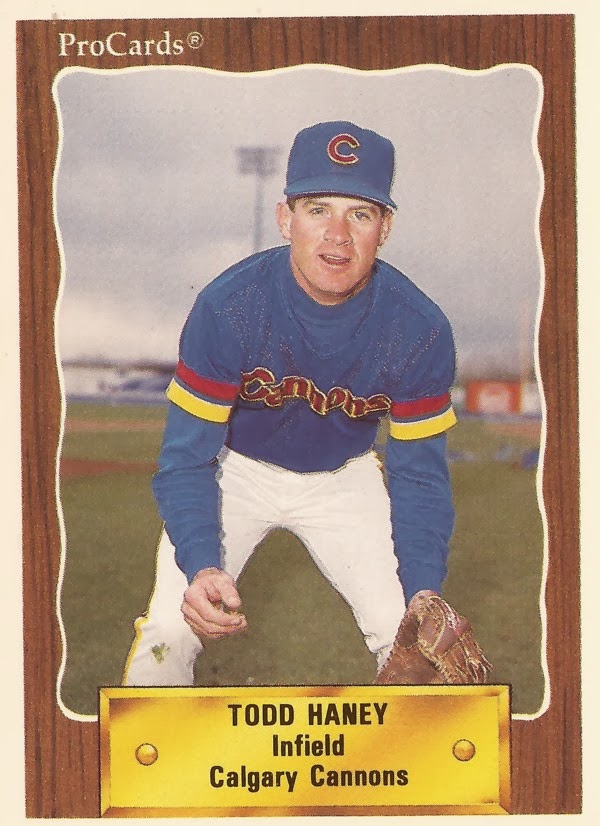 The Cubs' Hall of Fame second baseman Ryne Sandberg was ill in April 1996 and infielder Todd Haney was right there, ready to fill in, according to The Chicago Tribune.

"That's my role," Haney told The Tribune. "Pinch-hit, play and every now and then . . . wherever (manager Jim Riggleman) wants to use me."

In fact, Haney was likely just happy for any role, as long as it was in the majors. In his 10th professional season, Haney came in with all of 49 major league games played. Filling in where needed in 1996, Haney equaled in that one season the number of games he'd played in in the previous nine.

Haney's time in the minors was so long, that he amassed more than 1,500 minor league hits. He'd even asked for the ball from his 1,000th, doing so, he told The Tribune, with his head down.

Haney's career began in 1987, taken by the Mariners in the 38th round of the draft, out of the University of Texas at Austin. Haney played that first pro year at short-season Bellingham, hitting .254 with five home runs.

He hit AA Williamsport in 1989 hitting .269, then AAA Calgary in 1990. At Calgary, Haney hit his best, at .339. But, despite that average at Calgary, Haney wasn't called up to Seattle. His reward was to be traded to the Tigers, then released.

Signed for 1991 by the Expos, Haney joined the team that would bring him to the majors for the first time. In 1991, at AAA Indianapolis, Haney hit .312. The next year was when he got that first call.

It was a rib injury to Delino DeShields in September that led to Haney getting called up. Haney debuted with Montreal Sept. 9. Haney got into seven games, getting three hits in 10 at bats.

In 1995, though, it looked as if Haney might finally break out. In 73 at bats, Haney got 30 hits, good for a .411 average. He also hit two home runs. His first home run came on the one-year anniversary of of his first in the majors. "That," Haney told The Tribune after the anniversary home run, "was one of those unexplainable baseball oddities."

But that break out year ended abruptly, as Haney broke his thumb. Going into 1996, though, Haney was looked at for a possible starting job, The Tribune wrote.

Possibly holding Haney back, though, The Tribune wrote, was his height. Haney was 5 feet, 9 inches tall.

That year, though, Haney made the team as a utility infielder. In April, Haney hit an infield single, legging out the hit to set up a teammate Brian McRae grand slam.

"McRae was the man today. He set the tone," Riggleman told The Tribune after that game. "But Haney's hit shows the type of player he is. Todd has not had much chance to bat. Still, he does his best to be ready."

Haney, though, finished the season with a batting average of just .134. In 1997, Haney went through the Mariners and Astros systems, without getting called back.

"They're throwing the ball real well," Haney told The Newport News Daily Press after a small slump in July. "I'm frustrating myself right now. I just have to keep working at it. This is nothing major to worry about."

Haney got one more call to the majors that September, playing in three games for the Mets, going 0 for 3. His career ended the next year, with another .311 campaign at AAA Norfolk.

Haney is now back in his home state of Texas, has served as hitting and fielding coordinator for the Waco Storm, a youth baseball program he founded in Waco, Texas.