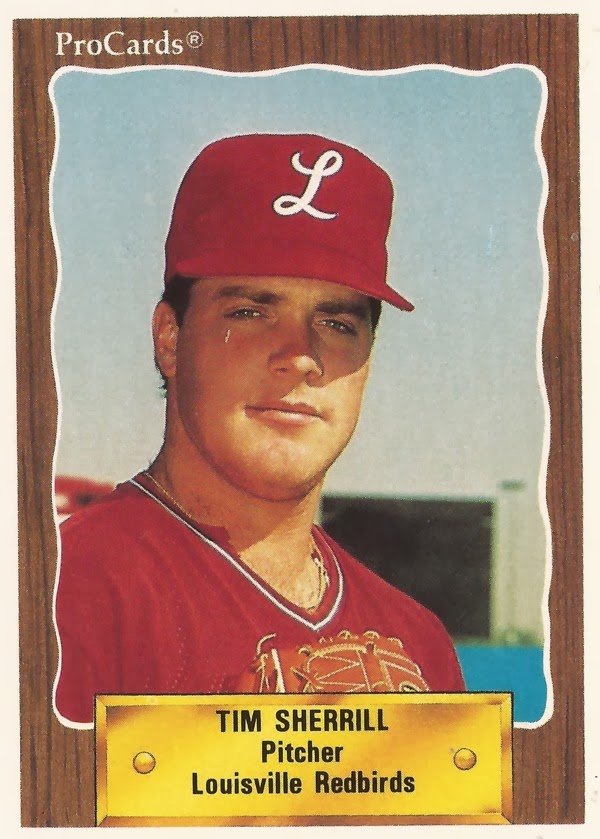 Asked about his career in his new chosen sport, Tim Sherrill wasn't sure how to respond. He was a fisherman now, one with the title of former major leaguer.

He didn't like to think of the fisherman part as a career, even though he had just won a major fishing tournament. He was just your average weekend fisherman, Sherrill told ESPN 1400, of Springfield, Mo., in a radio interview Oct. 5, 2009 after his win.

"I fish every chance I get," Sherrill told his interviewers. "I like to compete. I guess that goes back to the days I played baseball in college and professionally. It's not as much competing against the fishermen, as it is against the fish.

"You know," Sherrill said, "that's what I'm gonna keep doing, I'm going to keep fishing and hopefully I can win another one of these these days."

Sherrill's time competing against the baseball fish - or sharks - lasted six seasons. It was a baseball career that got him to the majors for brief stints in two seasons and into a total of 18 contests.

Sherrill's professional baseball career began in 1987, taken by the Cardinals in the 18th round out of the University of Arkansas. At Arkansas, Sherrill worked with two other pitchers in March of that year for a combined no-hitter. Before the Razorbacks, Sherrill pitched for North Arkansas, earning himself a spot in the school's Hall of Fame.

With the Cardinals, Sherrill started at rookie league Johnson City, pitching in 42 innings and posting an ERA of 3.00. He hit single-A Savannah and St. Petersburg for 1988, with a combined ERA on the year of just 1.70. In on April game, Sherrill struck out the final six Sumter batters for a Savannah win.

Sherrill returned to St. Petersburg in 1989, showing an ERA of 2.12 with six saves and 48 strike outs. One of those saves came in July at Dunedin with a hitless ninth.

He made AAA Louisville in 1990, skipping over AA entirely. With Louisville, Sherrill had an ERA of 2.49 in 52 games. It was that August that the Cardinals' Bryn Smith was placed on the disabled list and Sherrill got his first call-up to St. Louis.

With the Cardinals that year, Sherrill got into eight games, his first Aug. 14, his last Oct. 3. In a total of 4.1 innings, he gave up three earned runs and struck out three. He gave up two of those runs in a Aug. 25 outing, giving up four hits and a suicide squeeze in an inning of work.

Sherrill returned to the Cardinals in mid-May 1991, getting into another 10 games, the final 10 big league games of his career.

This time, he gave up 13 earned runs in 14.1 innings of work. Four of those came May 27. After being described by The Pittsburgh Post-Gazette as neatly extricating himself from a jam in one inning, gave up four runs in the next. Three more runs came as he gave up a home run in June to Hall of Famer Eddie Murray.

Sent back down by late June, Sherrill returned to Louisville. Another year at Louisville in 1992 and Sherrill's playing days were done.

But, years later, as he described standing on the stage, waiting to see if he'd won the Central Pro-Am Association's 2009 fishing championship, Sherrill reached back to his baseball days.

"I hadn't been that nervous," Sherrill told ESPN 1400, "since I was standing on the mound at Busch Stadium in 1990 for my first big league game."

Sherrill ended up winning, bringing in more than 28 pounds of fish over two days that October, besting the second-place competitor's 25-pound haul.

Compare those numbers to the numbers Sherrill put up at Busch that day on Aug. 14, 1990: two-thirds of an inning, no hits, no runs.