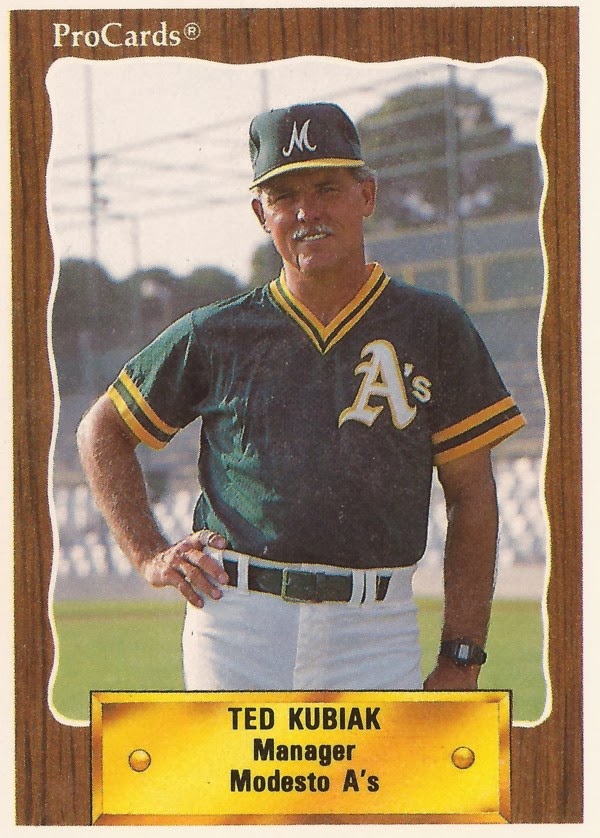 Ted Kubiak made it to the majors and he stuck around for a decade. His role, though, wasn't the one he had envisioned for himself.

His role was as a utility infielder.

"The first couple of years I was angry being a utility player," Kubiak told reporters after helping the Padres beat the Cubs in 1976. "Then I calmed down. I decided to excel at different positions and to do the best I could to help a team. Being angry never helped anyone."

His playing days soon over, Kubiak took the lessons he learned as a player on to a long career as a coach and coordinator with the Indians and Athletics organizations. It's a career that continues in 2014, with Kubiak serving as manager of the short-season Mahoning Valley Scrappers.

Kubiak's long career in baseball began in 1961, signed by the Athletics as an amateur free agent out of his native New Jersey.

For 1970, Kubiak was traded to the Brewers. He also became a regular, getting into 158 games split between second base and shortstop. He hit .252 with four home runs and 41 RBI. He then returned to the Brewers to start 1971.

"I really feel like I belong now," Kubiak told The Milwaukee Journal that April. "Last year, I had to go out and prove myself at this position. This year, I have been a second baseman since the start of spring training and perhaps for the first time I feel that I am now a major leaguer."

Kubiak continued in the major leagues through 1976, going through the Cardinals, Athletics, Rangers and Padres. With Oakland in 1972 and 1973, Kubiak helped the Athletics to back-to-back championships.

When his major league career was over, Kubiak had tallied time in 977 total major league games. He also had substantial time at second base, shortstop and third.

By 1989, Kubiak was a manager in the minor leagues, taking the helm of the single-A Modesto Athletics. He stayed with Modesto for five seasons. He moved to the Indians system in 1994, taking over AA Canton-Akron. He has been with the Indians ever since, though he hasn't made the majors as a coach.

In 2010, Kubiak managed single-A Lake County. That July, he spoke with The Ann Arbor News about one of his players, Michigan-alum Adam Abraham. Kubiak was impressed with how Abraham dealt with early adversity.

"The greatest thing about Adam is his attitude," Kubiak told The News. "He's been in a position here where he wasn't playing early, but now he's in there pretty much every day. Not playing all the time naturally affected his timing and rhythm."

Kubiak returned to short-season Mahoning Valley in 2012, where he continues for 2014. The 2014 season will be his ninth season managing in the New York-Penn League since 1996.

In 2013, Kubiak told The Warren Tribune Chronicle his thoughts on new techniques for evaluating players, that they don't tell the full story..

"You have to know a player's approach at the plate," Kubiak told The Tribune Chronicle. "You have to know his heart, his personality, how he does on the field, in the locker room and with his teammates. Even how much he likes his uniform - all that stuff affects a player."