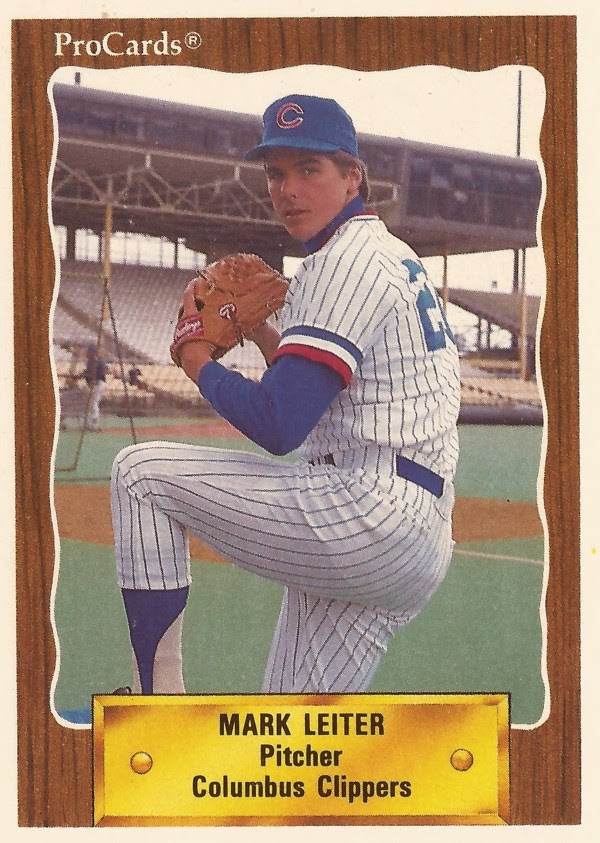 In the middle of a 9-7 season with the Tiger in 1991, Mark Leiter took time out to reflect on how he got there.

And how he almost didn't get there at all - shut down for three full seasons in the minors, from 1986 to 1988, due to shoulder problems.

"Sometimes, I say to my wife, 'Can you believe where we were four years ago?'" Leiter told The Associated Press after a win. "That's why I enjoy every day I'm here, whether it's pitching or shagging BP. I don't take it for granted. There's never a long day for me."

Back from the shoulder problems, Leiter was in his second season in the majors. He would go on to pitch in nine more.

Leiter's career began in 1983, taken by the Orioles in the fourth round of the draft out of Ramapo College of New Jersey. He played in rookie and single-A into 1985, getting a brief look that year at AA Charlotte.

Then his shoulder problems came. He didn't return until 1989, signing with the Yankees. Leiter advanced rapidly, hitting single-A Fort Lauderdale, then jumping to AAA Columbus. In 1990, he started back at Columbus, then made the Bronx in late July.

He made the team after a series of injuries to the Yankees pitching staff and Leiter knew he could go back at any moment. It was something he tried not to think about, he told The New York Times.

''I put too much pressure on myself by thinking about that,'' Leiter told The Times. ''I know what I have to do to stay here. Pitching well is the bottom line. I know I've got to pitch well, as well as I've ever thrown. But once the game started, I didn't think about it.''

Leiter ended up getting into eight games, starting three. He went 1-1 with a 6.84 ERA. For 1991, the Yankees traded Leiter to the Tigers. With the Tigers, Leiter spent almost the entire season in the majors.

He stayed with the Tigers through 1993, going 8-5 in 1992 and 6-6 in 1993, both years splitting time between starting and relieving. In each of his seasons in Detroit, Leiter threw a complete game, including one in June 1993.

After that 1993 complete game, Leiter turned his thoughts to the Tigers relief corps, two of which got ready in the bullpen, but didn't get in the game.

"I'll tell you, pitching a complete game really didn't mean a thing to me," Leiter told The AP after the game. "At least not right now. That's because I was a reliever. I know how it is to be warmed up in the bullpen and wanting to get in the game."

The next spring, the challenges Leiter had gone through up to that point were nothing in comparison to what he and his family went through. Leiter and his wife lost their infant son to a rare muscle disease.

Wondering whether it was too soon, Leiter took the mound for his new team the Angels five days after his son's death. He didn't get the win, but his Angels teammates were still in awe of his performance, The Los Angeles Times wrote.

"What he did today was totally unbelievable," Leiter teammate Gary DiSarcina told The LA Times. "This will be a day that none of us will ever forget."

Leiter went on to play into 1999, playing with the Giants in 1995, then the Expos, Phillies and Mariners. In May 1999, shoulder problems again shut down Leiter, taking him out of action the rest of that year and the next.

He returned in 2001, though, getting a shot to play with his brother Al Leiter on the Mets. But Mark didn't make the team, instead returning to the majors with the Brewers for 20 final outings. He went 2-1, with a 3.75 ERA.

One more season at independent Newark and Leiter's pitching days were done. Leiter has since gone on to teach pitching one-on-one with students in New Jersey.