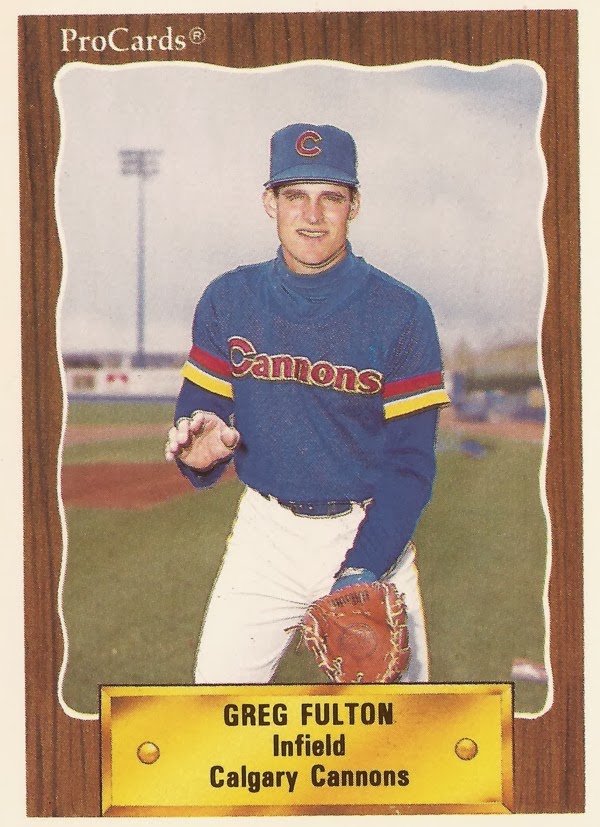 The Vermont Mariners had just defeated the Reading Phillies 5-3 on the strength of a five-run sixth inning, Aug. 25, 1988. But it wasn't the sixth that Vermont manager Rich Morales looked to as the key to the game, it was the second inning and the defensive play of first baseman Greg Fulton, according to The Reading Eagle.

"That was an incredible inning," Morales told The Eagle. "We made a first-to-home-to-first double play. One of the reasons I played (Greg) Fulton tonight was because of his defense with all those left-handed hitters.

"He's the best defensive first baseman in the league," Morales told the paper, "and he did the job when he had to do the job. That was the ballgame for us right there; it really was."

Fulton was the best defensive first baseman in the league - the Eastern League managers voted him so earlier in the year.

But Fulton wouldn't get the chance to show off his defensive skills with Vermont's parent club, Seattle, or anywhere else in the majors. Fulton made AAA for parts of three seasons, but never made the majors.

Fulton's career began with the Seattle organization in 1985, taken in the 29th round of the draft out of the University of Massachusetts.

Fulton played that year at short-season Bellingham, hitting .200 with one home run. He got one of his hits in a July game, adding an insurance run in a 3-1 victory. He got two more hits days later, a double and a triple, both wind-aided.

He played 1986 at single-A Salinas, improving his numbers to 10 home runs and a .272 batting average. Fulton got a hit in June off rehabbing major-leaguer John Candelaria. That same month, Fulton hit a three-run triple, part of a three-hit, six-RBI night.

He first hit AA in 1987, with Chattanooga. The bump up in level came with a bump back down in average to .232 and seven home runs. It was in 1988 that Fulton took his glove and hit Vermont, staying in AA. His hitting, however, dropped again to .213 with a single home run.

Fulton played 1991 at AA Harrisburg, hitting .293. He split 1992 between Harrisburg and a return to AAA at Indianapolis. He hit .216 at Indianapolis with six home runs. Fulton was credited with a single game played in 1993, at Harrisburg, ending his career short of the majors.