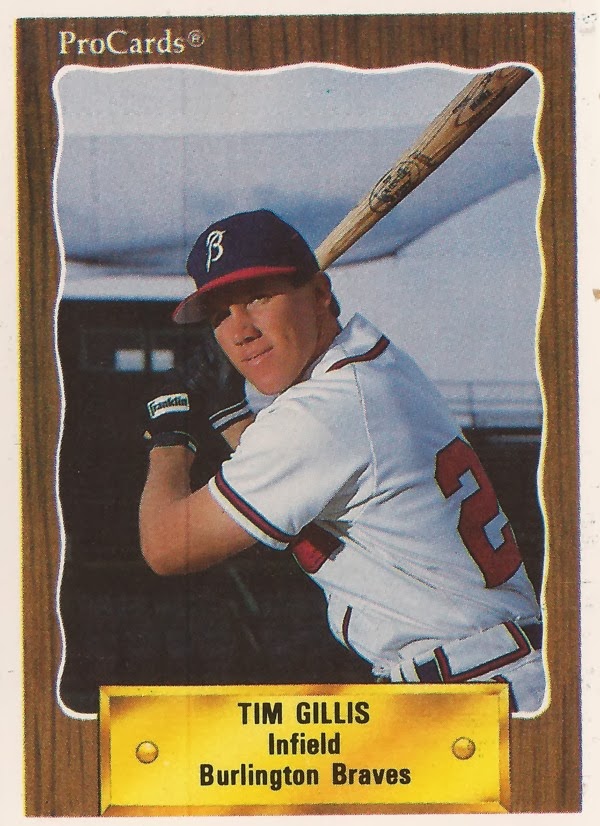 Tim Gillis hit a home run to tie this May 1994 contest for the Greenville Braves. Later, he hit the go-ahead double that won it, according to The Orlando Sentinel.

That double came with two men on in the eighth inning. Gillis told The Sentinel afterward that a double wasn't what he was looking for.

"I was just looking to get a pitch out over the plate and drive it up the middle," Gillis told The Sentinel. "I wanted to drive in at least one. Then the ball rolled to the wall and we got two."

Gillis was in his fifth season as a pro that year with the AA Braves. He wouldn't get another. He never made AAA.

Gillis' career began in 1990, signed by the Braves as an undrafted free agent, out of Livingston University, now the University of West Alabama.

At Livingston, Gillis set school records by hitting 14 home runs, and 44 career doubles. In spring 1989, he also hit .383, according to The Tuscaloosa News.

It wasn't until that October, though, that Gillis got a professional contract. "I'm overwhelmed right now," Gillis told The News after signing.

Gillis played his first year in 1990 at single-A Burlington. He hit 12 home runs, had 61 RBI and finished with a .256 average. Gillis started the year strong, hitting a walk-off home run in his fifth professional game.

Gillis made AA Greenville in 1993, hitting .251 on the year, with 14 home runs. He hit one of those home runs in an early August game, a game where he knocked in the 11th-inning, game-winner on a single.

He returned to Greenville for his final season in 1994. He hit nine home runs, ending with a .241 average.