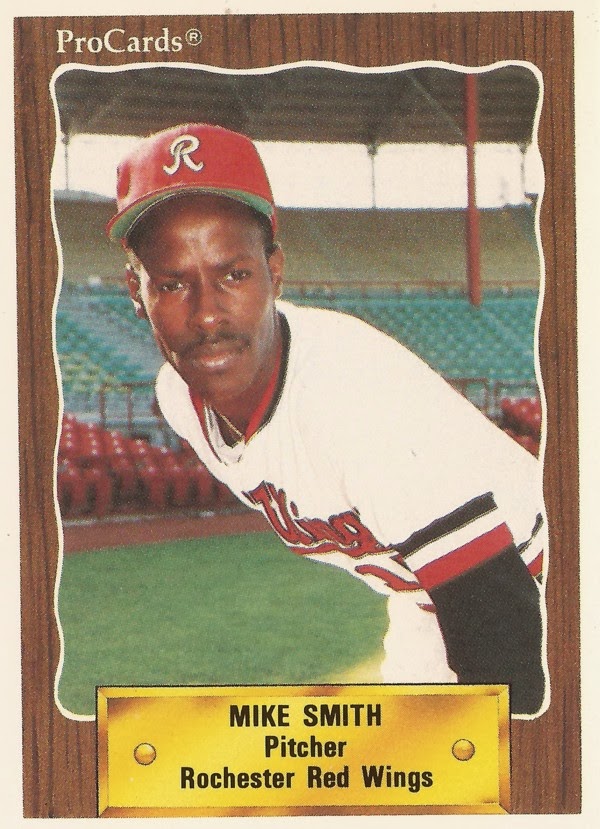 Texas Mike Smith made his major league debut for Baltimore in late June 1989 and it was a long debut. It was long, not in the number of outs he got, those numbered just four. It was long because of the number of runs he gave up: eight.

Orioles Manager Frank Robinson told The Associated Press after the game he felt bad about leaving Smith out there as long as he did. But he had to. His bullpen was already depleted.

"I feel bad about that," Robinson told The AP. "I hope he does better next time out."

Smith did a little better his next time out. He went four innings against the same Tigers he faced in his debut. This time, however, Smith only gave up two hits and no runs. He also got the win.

Smith went on to pitch in 13 games for the Orioles in 1989, pitching well in all but three outings. Smith would return to Baltimore for two more games in 1990, concluding his brief major league career.

Smith's professional career, however, would be far from over. Smith later hit the independent circuits, being credited with his final game as a player in 2006.

Taken in the fifth round of the 1984 draft by the Reds, Smith began his career with Cincinnati in the rookie Gulf Coast League. He first made AA Vermont in 1987, returning to AA for 1988. The second year, at Chattanooga, Smith went 9-10 with a 3.20 ERA. One of his losses came in a June 26 game at Charlotte.

He moved to the Orioles system for 1989, selected in the rule 5 draft. It was that next spring where Smith got his nickname, Texas.

The nickname came more out of necessity than anything. A native of San Antonio, Smith became one of two in Orioles camp with the same name: Michael Anthony Smith. The other Michael Anthony Smith, with a longer major league record, became Mississippi Mike Smith, for his state of origin.

The two Mike Smiths also played together at Rochester, often being put in the same room. "Saved a lot of trouble," Mississippi Mike Smith told The Pittsburgh Press in August 1989. "At least all of the phone calls went to the same room."

Texas Mike started the year at AAA Rochester after the Reds didn't reclaim him. He made Baltimore, in time for that disastrous debut June 30.

But, like Robinson had hoped, Smith came back in his second appearance and got his first win. He got his second win July 16 coming in in the 11th and facing two batters. On July 26, he struck out Hall of Famer Kirby Puckett. In his 13 outings for the Orioles that year, Smith finished with an ERA of 7.65.

In two September 1990 games, amounting to three innings, Smith gave up four earned runs, ending his major league career. His affiliated career ended, except for three games, after the next season, with the Brewers system at AA El Paso.

Those last affiliated games came four years later in 1995, at Cincinnati's AA team at Chattanooga. That spring, according to USA Today, Smith agreed to be a replacement player for the Reds.

Smith went on to play parts of 10 seasons in the independent leagues, at places like Abilene, Ozark and Alexandria. He pitched three complete games for Coastal Bend in 2004, one of those coming in a May game, he threw another one in June.

In July 2005 with Fort Worth, Smith won pitcher of the week honors with a seven-inning shutout. By then, Smith was in his eighth season in the league, becoming the all-time leader in wins with 79 and strikeouts with 1,082, according to Our Sports Central.

In 2006, Smith served as manager of the Laredo Broncos in United League Baseball. He finished the season at Alexandria as pitching coach and player. His games with Alexandria in 2006 were the final credited contests of his career.