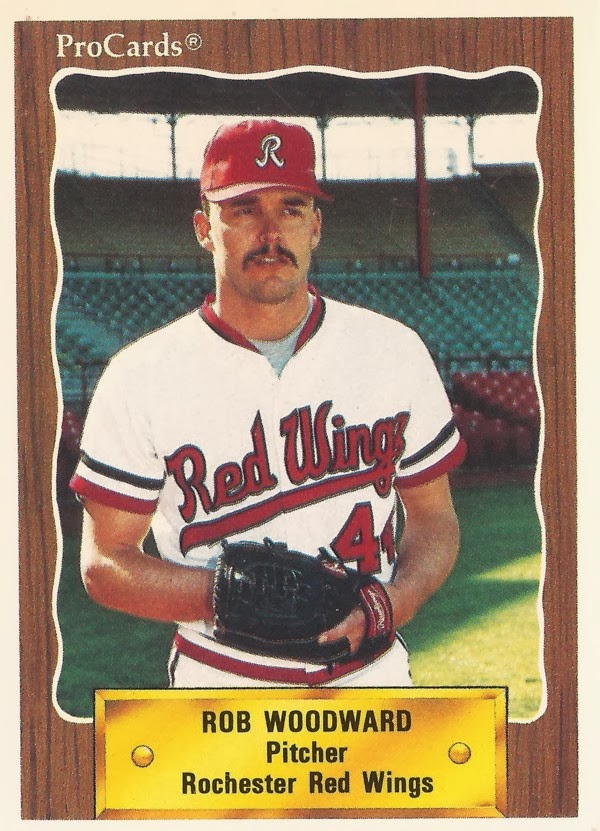 Tom Seaver became a member of the Boston Red Sox in June 1986 and somebody had to go. That somebody was Rob Woodward.

It was a move that saw Seaver, the future Hall of Famer, catch up with the young pitcher he displaced.

"Best of luck," Seaver told Woodward, according to The Providence Journal. "You'll be back."

Woodward's career began in 1981, taken by the Red Sox in the third round of the draft out of Lebanon High School in Lebanon, N.H. Woodward played that year at short-season Elmira, going 4-3 with a 3.39 ERA. He made single-A Winter Haven in 1982, then AA New Britain in 1984.

"I couldn't wait to throw it," Woodward told the news service March 12. "I found out I'd see a little action today, and I was nervous in anticipation."

Woodward made the big club as a September call-up. In five appearances, Woodward went 1-0, with a 1.69 ERA. His first start came Sept. 29. That was his win.

"He had command of his repertoire," Red Sox manager John McNamara told the news service after Woodward's win. "He battled hitters very well. It was an excellent showing."

Going into 1986, Woodward was looking to continue is success of the previous September. He also spoke in February of his debut Sept. 6. It came at 1:42 a.m., after a rain delay.

"Sure, I was excited," Woodward told The Associated Press. "It was a strange hour. The weather was miserable. We were losing. But, heck, I didn't care. It was the major leagues, a dream come true."

Woodward got into nine games, six of them starts, for the Red Sox in 1986. He went 2-3, with a 5.30 ERA. Woodward played the rest of the season at Pawtucket, posting a scoreless innings streak at one point of 27.2 innings.

His numbers were similar in 1987, if a little worse. In the same number of outings and starts, Woodward went 1-1, with a 7.05 ERA. Woodward had looked for a regular role with the Red Sox in 1987. Going into the year he told The AP he felt more confident.

"I feel sharper and I have more confidence this year," Woodward told The AP in March. "If you haven't got the confidence in what you're throwing, you're gonna get hurt."

Woodward's time left in the majors, though, was limited. After 1987, it was down to a single game.

The 1987 season over, Woodward began to lose weight. He also suffered blurred vision, The Hartford Courant wrote. The diagnosis was juvenile diabetes.

By May, he was pitching normally. But he didn't get back to Boston until September then, for only that single, last game. He pitched 2/3 of an inning Sept. 26 and gave up an eared run.

In spring training 1989, the starter-turned-reliever had the best ERA of the spring, 0.00, The AP wrote. But he was sent back to Pawtucket, where he would spend the year.

"I've just tried to work hard and show people what I can do," Woodward told The AP in late March. "I just have to be ready when an opportunity comes."

The opportunity didn't come again. Woodward signed with Baltimore for 1990, playing that year and the next at AAA Rochester. His career ended, without getting back to the majors.