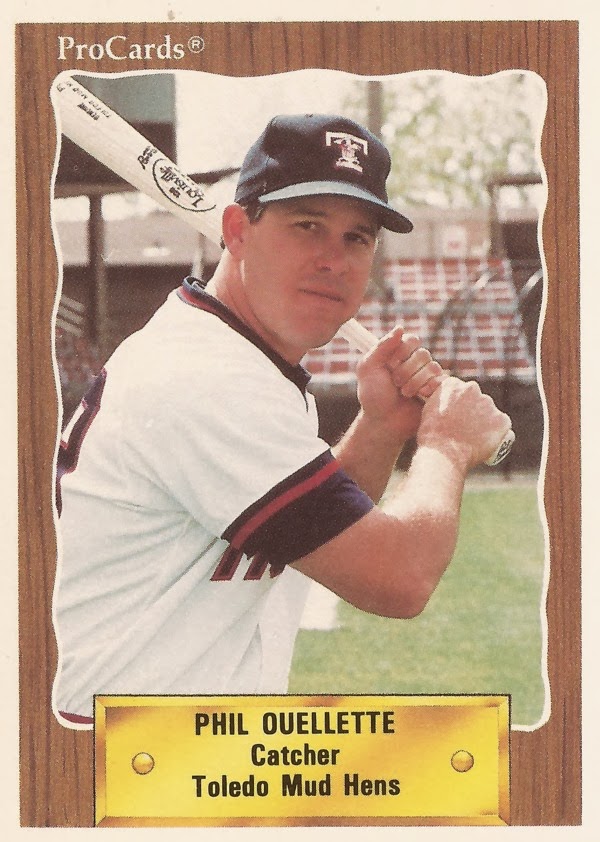 Phil Ouellette didn't hit a lot of home runs in his decade as a pro. He hit 52 in 10 seasons.

But, on one night in April 1990, Ouellette hit two, one of them a grand slam, The Toledo Blade wrote.

Ouellette also didn't get a lot of time in the majors in his decade as a pro. He got just 10 games, playing for the Giants in 1986 as a September call-up. In those 10 games, 26 plate appearances, Ouellette got just four hits, none of them a home run.

Ouellette's career began in 1981, signed by the Giants as a free agent. His final season came after his 10th, playing that year in 1990 with the Tigers at AAA Toledo. But it didn't end fully until spring 1995, when the one-time Home Depot employee signed with the Angels during the strike.

He hit single-A Clinton in 1982 and single-A Fresno in 1983. At Clinton, Ouellette hit the most home runs in a season in his career, he hit 13. For 1984, Ouellette made the jump to AAA, playing at Phoenix.

Ouellette stayed at Phoenix for three seasons. He hit .263 his first year and .313 his third. His third year got him his one call up to the majors, with San Francisco.

Ouellette debuted with the Giants Sept. 10. He went 0 for 2 against the Reds. Coming back the next day, though, Ouellette got his first major league hit, going 1 for 3 with a walk.

Ouellette walked three times during his short stint in the majors. One of those came against the Astros Mike Scott. Ouellette worked the walk as Scott no-hit Ouellette's Giants. While it didn't break up the no hitter, it did break up a string of 19 consecutive set down by Scott, The Associated Press wrote.

In what turned out to be his final major league game, Oct. 3, Ouellette scored a run, on a passed ball. He also got two of his four big league hits, going 2 for 5.

Ouellette returned to Phoenix for 1987, then went through the Mariners and Astros AAA clubs, before landing with the Tigers at Toledo for 1990. At Toledo, Ouellette hit .245 in 99 games. He also hit his final eight home runs.