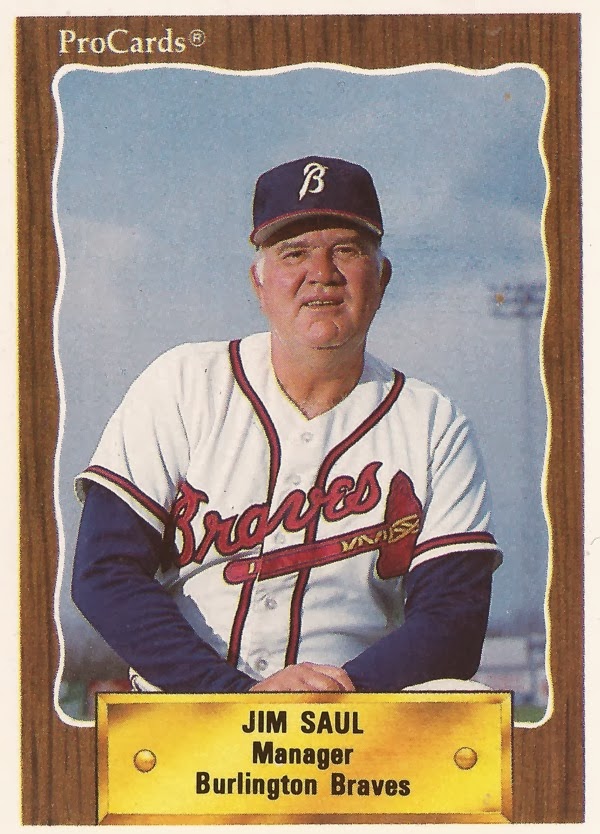 Jim Saul spent much of his career in the low minors, both as a player and as a manager.

In 1997, as he started another year as manager of the short-season Eugene Emeralds, Saul explained to The Eugene Register-Guard his philosophy as manager.

"As a manager at this level, the players always come first," Saul told The Register-Guard. "You give 'em every opportunity to do it or not to do it."

Saul also brought with him the experience that comes with decades in the game. By the time he was done, the number of decades in baseball behind Saul numbered five.

Saul's long career began in 1959, signed by the Cardinals out of his native Virginia.

Saul the player started at Class-D Wytheville and Daytona Beach. He also played briefly at AA Tulsa. He then moved to Class-D Keokuk for 1960 and made it to AAA for 50 games in 1961.

Saul continued as a player through 1972. He ended up getting time in 14 professional seasons, more than 1,000 individual games. Along the way, he was traded for major leaguer Bob Skinner.

In 11 of those seasons, Saul saw time at AAA. But he never saw time in the majors.

By 1973, Saul was a minor league manager, leading single-A Salinas. He stayed there for two seasons. He then made it up to the majors, going directly to Chicago as bullpen coach. Saul had played three of his seasons in the Cubs system.

In 1986, Saul became manager at AA Albany-Colonie. By then, Albany-Colonie was his eighth stop as a manager, according to The Schenectady Gazette.

As he started his stint at Albany, Saul told The Gazette his job was about instruction.

"Any time during the baseball season, a manager has got to put a player in a pressure situation and let him handle it," Saul told The Gazette. "I've got to let them prove that they can handle it because in the majors, it's asked of you every day."

By 1989, Saul was back in single-A, leading the Burlington Braves. In 1991, he moved back to rookie ball and the Gulf Coast League. He stayed at rookie or short-season until his last recorded season, 2009.

In 2008, as he served as hitting coach at rookie Bluefield, Saul told MiLB.com why he was still in the game, then in his 49th season.