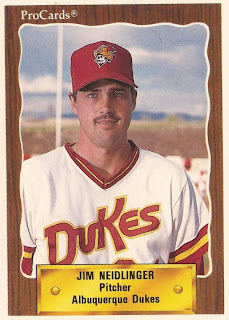 Jim Neidlinger was making his second major league start on Aug. 7, 1990, called up from the Dodgers' AAA affiliate in Albuquerque. In Cincinnati, Neidlinger threw a gem, 7.2 innings, giving up one unearned run.

Back in Albuquerque, his wife Ann watched in a sports bar. They had the game on satelite, the Los Angeles Times wrote. Soon, the entire bar was cheering Niedlinger on, the Times wrote.

"Every minute I am here, I savor," Neidlinger told the Times.

Neidlinger waited eight seasons for those minutes, spending six of those in the Pirates organization, the other two with the Dodgers.

Neidlinger's career began in 1984, signed by the Pirates as a 19-year-old free agent, after playing at Napa High in California. He played that year at single-A Macon, going 9-8 with a 2.77 ERA.

He made AA Nashua in 1986 then, briefly, AAA Hawaii. At Nashua, Neidlinger went 12-7 with a 2.42 ERA. He pitched six innings of five-hit ball in an August win. That same month he won Eastern League Player of the Week honors for the third time on the season, according to The Nashua Telegraph.

The month before, he threw a no-hitter against Glens Falls, striking out six and walking two. He took care of the Albany Yankees later in the month.

"He has been sharper," Nashua manage Dennis Rogers told the Schenectady Gazette of Neidlinger, "but that's where he has grown on the mound. He's better under pressure and he's poise."

It was in October of that year that the Pirates sent Neidlinger to the Dodgers, trading him for Bill Krueger. With the Dodgers, Neidlinger made the jump to AAA for good. He played 1989 at Albuquerque, posting a 4.06 ERA splitting time between starting and relieving.

For 1990, he hada 4.28 ERA, back to mostly starting. It was on Aug. 1 that he made his major-league debut. He went six innings against the Giants at Dodger Stadium, giving up seven hits and just one earned run. That second start, the gem, Neidlinger actually took the loss. The unearned run he gave up turned out to be the only run of the game.

In his third start, Neidlinger got his first win. In seven innings, he gave up seven hits, giving up a two-run home run. The Dodgers won 7-3.

About the win, Neidlinger told reporters afterward, "I've been dreaming about it since I was 8 years old."

Of Neidlinger's first 10 starts, the Dodgers won eight, the Times wrote that September, including a four-hit performance Sept. 18.

"I look on it as an opportunity to do some things," Neidlinger told the Times. "I like the pressure. I think it brings out the best in me. I like to be in these situations."

Then, in 1994, Neidlinger tried the Cardinals system with similar results. In seven starts at Louisville, he posted an ERA of 6.21, marking his final year in pro baseball. These days, Neidlinger serves as assistant baseball coach at Middlebury College in Vermont. He also runs his own baseball school.

“I think that helped mold me of not showing emotions on the mound when things are going good or bad,” Neidlinger told the Napa Valley Register. “That helped me a lot, being able to recover from tough situations, because riding trains, planes and buses, and trying to compete to get to the major leagues is not an easy deal, especially as you get older.

"Coach helped me try to understand what being a professional was all about," Neidlinger told the Register. "It took me a while to understand that."

The Greatest 21 Days caught up with Jim Neidlinger in April 2011, read the three-part interview: Jim Neidlinger, No Power Pitcher