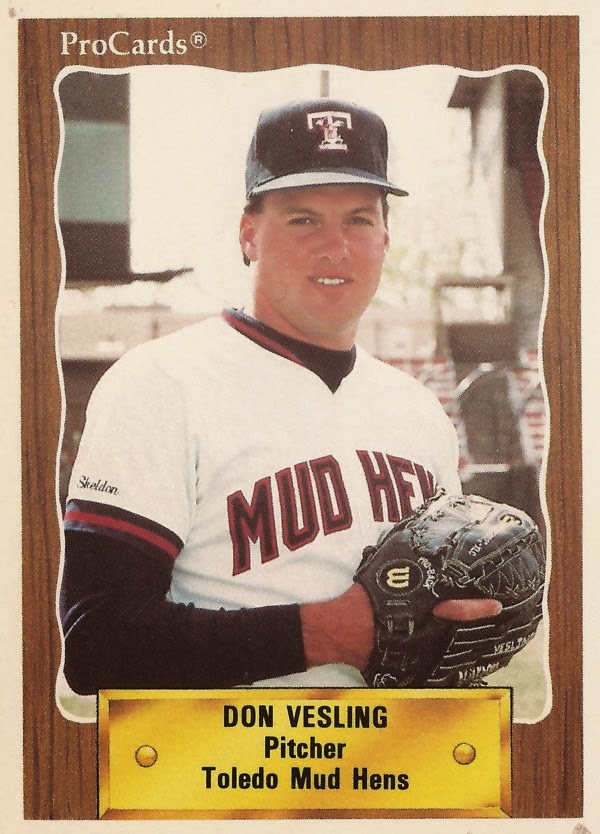 Don Vesling tried to analyze his pitching to The Toledo Blade in 1989. He'd made it to AAA for the first time, but he'd also gotten wild.

"I never had a problem with walks until I came here," Vesling told The Blade before a mid-August game. "I was trying to be too fine."

Vesling's career began in 1987, taken by the Tigers in the 14th round of the draft, out of Eastern Michigan University.

At Eastern Michigan, Vesling played baseball and football. On the football team, Vesling served as kicker, kicking the game-winning field goal in a September 1986 game against Akron. The previous October, Vesling kicked two field goals, and, as a wide-receiver, caught a touchdown pass. In baseball his final year, Vesling was the team's MVP.

With the Tigers, Vesling played that first year at rookie Bristol, picking up a game at single-A Lakeland. Between them, Vesling went 6-2, with a 2.95 ERA. Vesling returned to Lakeland for the year in 1988, going 10-8, with a 3.14 ERA.

Vesling then started 1989 at AA London, going 5-4, with a 3.81 ERA. By late May, though, he led the league with a 1.13 mark. Vesling then got his first look at AAA Toledo. In his second outing, Vesling threw a seven-inning shutout.

Vesling played three more seasons, all in the minors. He played all of 1990 at AAA Toledo, splitting time between starting and relieving. In June, he went seven innings, giving up four hits.

Vesling's last two seasons were spent split between AA and AAA. He started 1991 at Toledo, before being sent back to AA in late May to make room for another pitcher. Vesling started 18 games at London, going 7-8, with a 4.49 ERA.

He started his final season in 1992 back at London, before arriving mid-year with the Padres, at AAA Las Vegas. Vesling ended his career with eight relief outings there, giving up three earned runs in 5.1 innings of work.

After his playing days were done, Vesling became a steel broker in Indiana. He was inducted in the Midview High School Hall of Fame in 2001. Vesling attended Midview in his hometown of Grafton, Ohio.