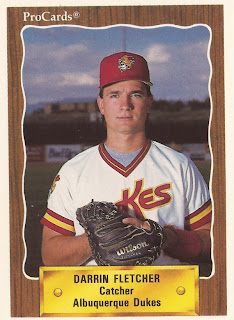 Darrin Fletcher's career was winding down in 2001 and with it a drop off in his hitting. The former All Star hit just .226 on the year.

It wasn't something he was happy with. But, late in the year, Sept. 2, he briefly came out of it, tying a career-high with five RBIs, through a double, a home run and a sacrifice fly.

"I'd rather finish up strong than spiral downward like I did in the first half," Fletcher told the Associated Press after the game. "It's important to me because I have a lot of pride in what I do, but more importantly, the team is looking better."

Fletcher's career ended the next season, his 14th with time in the majors. It was a career that would begin in Southern California, but come into its own and end north of the boarder.

Fletcher's career began with the Dodgers, drafted in the sixth round in 1987, out of the University of Illinois. He made AA San Antonio in 1988, then AAA Albuquerque and and then debuted in Los Angeles in 1989.

Though he made the majors quick, his start was slow. He played in just five games for the Dodgers in 1989, going 4 for 8 with a home run. He returned to the majors for 1991, playing in a total of 11 games, two with the Dodgers and nine with the Phillies. He was traded to the Phillies in exchange for Dennis Cook.

In 1991, Fletcher got into 46 games. The catcher also caught himself a no-hitter. Tommy Greene gave up seven walks, but no-hit the Expos on May 23, 1991, with Fletcher behind the plate.

"It was strange," Fletcher told the AP later, "all of a sudden the no-hitter was there in the eighth inning. Maybe because there were a lot of runners on base we didn't notice it."

Traded to the Expos for 1992, Fletcher found a home in Canada. He played in Montreal through 1997, then signed with the Blue Jays through the end of his career.

Going into 1993, Felipe Alou tagged Fletcher as a backup. But that didn't mean less work.

"It takes more time to get ready," Fletcher told the South Florida Sun Sentinel that March. "It's tougher to get ready, but that's something you have to get used to on the big-league level."

That year, however, Fletcher became the regular, playing in 133 games, hitting .255. He also ran into Lenny Harris, or Lenny Harris ran into him, Fletcher recalled in 1995.

Harris ran into Fletcher so hard, Fletcher almost blacked out. The collision made Fletcher also affected him mentally, making him apprehensive about blocking the plate. But by April 1995, he was fine, blocking Pirate Jeff King.

In 1994, Fletcher made the All Star team, his only All Star appearance. That year was also his first with double-digit home runs. He had 10. In 1997, his final year with Montreal, Fletcher hit 17.

In June 1999, Fletcher hit a three-run home run in the bottom of the 10th, giving the Blue Jays a walk-off, one-run win.

"I never had a walk-off home run in my career where I hit a home run to win a game, it's a neat feeling," Fletcher told reporters afterward.

Of his 20 home runs in 2000, three of them were grand slams. In August 2000, Fletcher had three home runs in the same game, almost single-handedly taking the Blue Jays to a 6-4 win.

"I'd have been satisfied mentally if I had just hit the ball hard," Fletcher told reporters after that game. "I hit all four hard and three went out. I saw the ball good tonight and had a good round of batting practice."