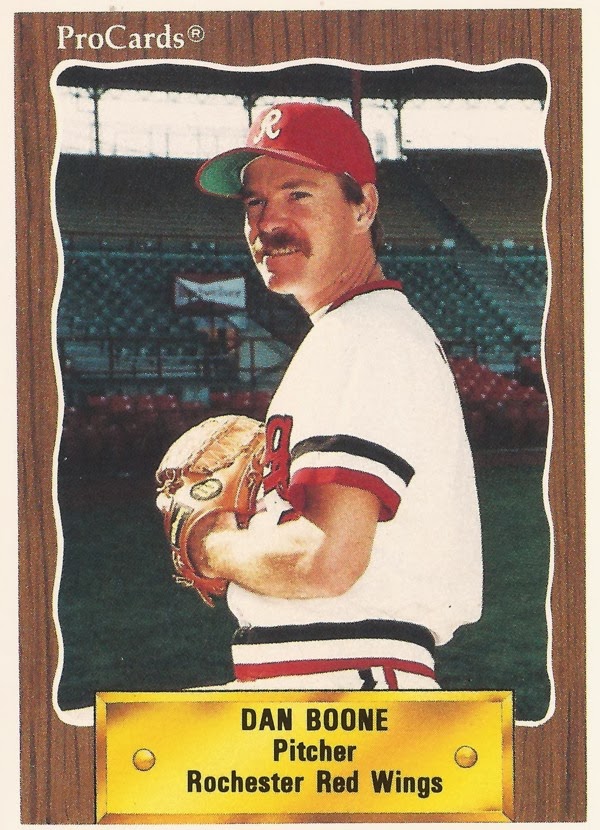 But after his pro career was seemingly over, that's what former Padres and Astros pitcher Danny Boone did. He did that for nearly six years, until, that is, the Orioles came calling.

Out of professional baseball since 1984, Boone heard about a new senior league in Florida. With the support of his wife, he went. And he did well enough for the Orioles to hand the 36-year-old a AAA contract.

"Deep down inside, every athlete wishes he could play until he's 100," Boone told a Washington Post columnist that spring, adding he was amazed his wife had been so supportive. "She realizes that now is the time."

Boone spent the summer at AAA Rochester before, improbably, returning to the majors that September - eight years after throwing his last major league pitch.

Boone entered pro ball, taken in the second round of the 1976 draft by the Angels. It had actually been the fifth time Boone had been drafted, the previous times he opted to stay at Cal State Fullerton.

He quickly made it to AAA Salt Lake City, but never cracked the California pitching staff. The Angels released him in spring 1980. Quickly signing him was the Padres, one of the teams who had drafted him earlier. He made it to San Diego the next year, pitching 37 games for the Padres.

Then came two years at AAA, first with Houston's Tucson team, then with the Brewers at Vancouver. The baseball offers soon dried up and the construction jobs began.

But he kept working on his game, and perfecting a difficult pitch, the knuckleball.

It was in fall 1989 that he signed on with the fledgling Senior Professional Baseball Association. The 35-and-over league was in its first season, it would fold in its second. It was the same league that Ron Washington played in.

Boone, and his knuckleball, were soon spotted by the 77-year-old Oriole scout Birdie Tebbetts.

"He's lucky he got an old scout with a big imagination," Tebbetts told Sports Illustrated that July. "Normally you don't dare suggest signing a 36-year-old guy, because somebody's liable to think you're senile."

The magazine also noted Boone's story was improbable enough, even without Boone's name. And, yes, he is related to that Daniel Boone, a seventh-generation Daniel Boone nephew. He'd also heard it all before.

"That's stuck with me since elementary school, when everybody would be singing songs about Daniel Boone," Boone told The Associated Press after signing that February. "I've had a lot to overcome in my life."

His greater concern for 1990 was his fingernails, requirements for throwing his knuckleball. He told SI they'd become badly chipped. He'd borrowed nail-strengthener from his wife.

Whatever he did, it worked. He played in four games that September, giving up his first runs in his fourth outing, his first-ever start. In all, he posted a 2.79 ERA. It was enough for the 36-year-old to be tagged a "rookie prospect" by one baseball card company.

He returned for 1991, his fingernail problems still getting in the way. He returned to AAA, this time with the Rangers, finally ending his career.

But, according to an interview with The AP that September in Baltimore, Boone was satisfied.

"When you start back at something like this at my age," Boone told The AP, "your only desire is to get back to the big leagues."