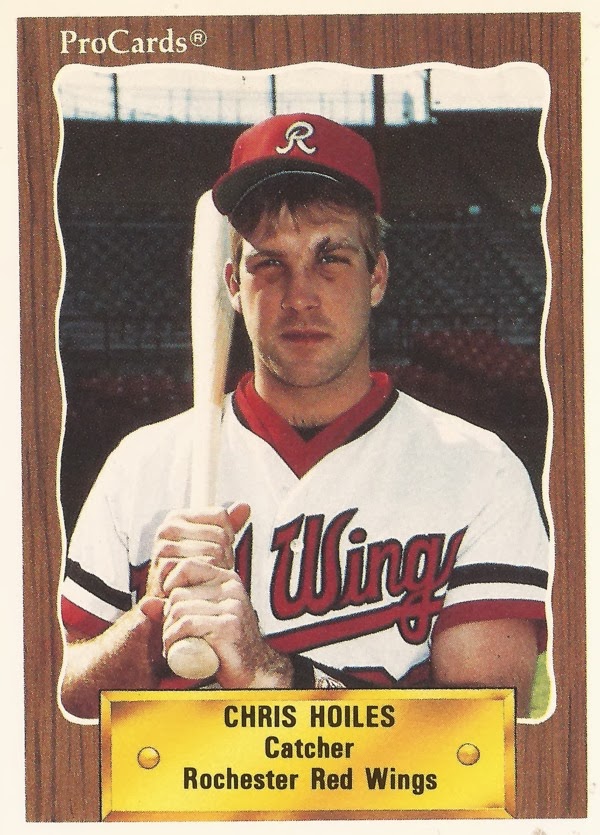 Chris Hoiles and Bob Melvin were expected to compete for a starting job in spring 1991, The Baltimore Sun wrote, and Hoiles was fine with that.

"That just makes me want to work harder," Hoiles told The Sun. "Before, there was always a question of how seriously they were looking at me, no matter what I did. Now, they're looking at me to be ready for Baltimore, so I know what I'm working for."

Hoiles had been working for that since 1986, when he was taken by the Tigers in the 19th round of the draft out of Eastern Michigan University.

He then first made the majors in 1989, six games with the Orioles. That was the first of what turned out to be 10 seasons in which Hoiles saw time in the majors, all of them with Baltimore.

Hoiles' stay with the team that originally drafted him, the Tigers, lasted three seasons. He made AA Glens Falls in 1987, then AAA Toledo in 1988. Then, in late August 1988, the Tigers sent Hoiles and two others to the Orioles, in exchange for Fred Lynn.

With the Orioles, Hoiles didn't wait long to make his major league debut. He debuted in late April, getting into his six games that year with Baltimore, going 1 for 9.

"We left spring training with the idea that Chris could possibly become a No. 1 catcher," Orioles manager John Oates told The Sun in August 1991. "As far as catching goes, I think he's made great progress. He's done a good job of throwing out runners, an outstanding job of working with our pitchers. He receives the ball well. And his bat is starting to come around."

In 1994, though, Hoiles got off to another slow start, The Sun wrote. He broke out of it in an early May game, with a home run. The game before, Hoiles came up after Cal Ripken was intentionally walked. Hoiles promptly singled in two runs.

"Your intensity increases when a team does that," Hoiles told The Sun of Ripken being intentionally walked. "But Cal is hot now, and I understand why they did it. Hopefully, that lit a fire under me."

Hoiles ended up hitting .247 on the year. Hoiles continued on with the Orioles through 1998. His last season, it was his power that got him noticed.

In an August 1998 game, Hoiles joined the select list of players who've hit two grand slams in a single game. He was the ninth up to that point to do it. And he hit them in front of his mother and pregnant wife, The Associated Press wrote.

"It's a bunch of things wrapped into one," Hoiles told The AP after the game. "I had friends and family here. Just to do two in one game, that in itself is pretty exciting."

Going into 1999, though, Hoiles' time with the Orioles was done. The team released him at the close of spring training. He then took another job with the team, that of roving catching instructor.

Hoiles has since gone on to other coaching jobs, including as manager of the independent York Revolution.

For Hoiles, the move to coaching was a natural one, he told The Sun after accepting that instructor position in April 1999.

"The game's been so good to me and I've had so much fun playing," Hoiles told The Sun that April. "At this point I feel doing something like this is a way of giving something back. And if I can reach one or two or more kids and have them enjoy what I went through, that would be a pleasure."