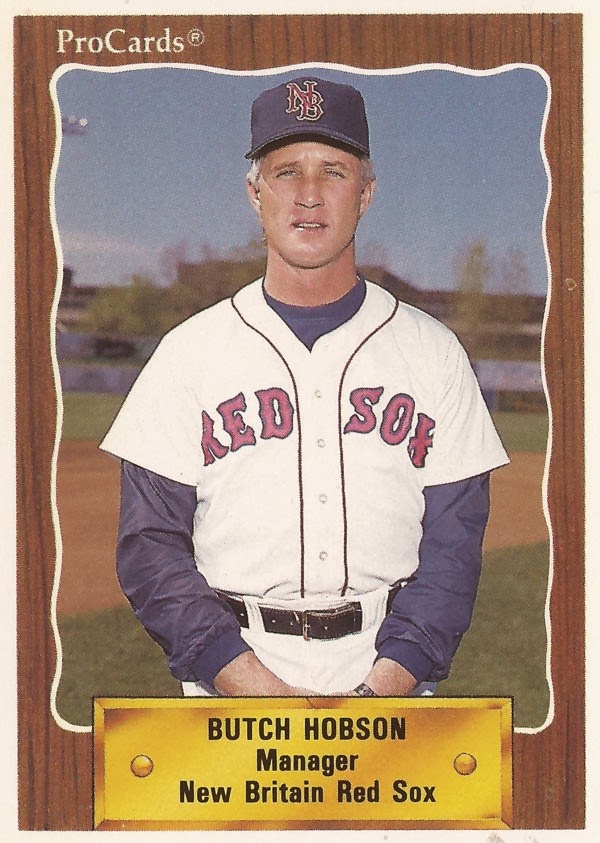 Butch Hobson had eight seasons with time in the majors behind him in 1983 and he wanted a ninth.

And he was doing his best to try and make that happen with the Yankees at AAA Columbus.

"I think if you love to play the game the way I do, it's not difficult to come down here and play hard," Hobson told The Toledo Blade that June. "I want to get back up and I'm not gonna do it doing nothing."

Hobson did get back up, but just not as a player. He got back up to the majors in 1992 in his post-playing career, as a manager.

Hobson's long career in baseball began in 1973, taken by the Red Sox in the eighth round of the draft, out of the University of Alabama.

At Alabama, Hobson played both baseball and football. In football he served as a quarterback in 1971, tallying two completions.

With the Red Sox, Hobson started at single-A Winston-Salem, then made AA Bristol in 1975. He also got a two-game look at Boston that year.

"I'm not seasoned yet, but I just have to learn the league and stay away from mental mistakes," Hobson told The Tuscaloosa News in October 1976.

He hit another 17 home runs in 1978 and 28 in 1979. Injuries shortened his 1980 season, then stints with the Angels and Yankees rounded out his major league career. He continued to play in the minors through 1985, hoping to return to the bigs.

"I'd be lying if I said that I never dreamt of managing in the big leagues, hopefully Boston," Hobson told The Associated Press after being given the top job. "I just got here a little quicker than I thought I would. It's a big thrill and I promise to give 110 percent."

Hobson lasted through 1994 before getting fired with an overall record of 207-232.

By 1996, Hobson was back managing in the minors, this time at AAA with the Phillies. Then came his arrest.

That May, Hobson's team was visiting Pawtucket. A package sent to him by a friend contained 2.6 grams of cocaine. He was arrested by the Drug Enforcement Administration. Quickly suspended, Hobson was later fired.

He admitted he used the drug previously, stopping in 1995. But the damage was done. He admitted no guilt in court, serving 60 hours of community service.

For 2000, Hobson had the opportunity to return to the Red Sox and manage AA again. Instead, he chose independent Nashua to be closer to his family. Regardless, Nashua was a baseball field just the same.