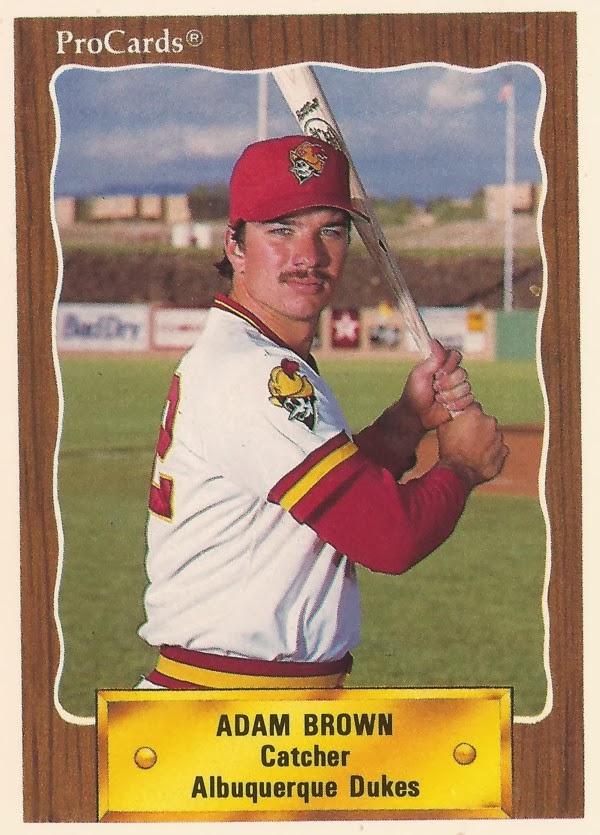 Adam Brown was entering his 10th season as a pro in 1995, speaking the The Dayton Daily News about his career.

It was a career spent entirely in the minor leagues. Talking to The Daily News about what went wrong, Brown pointed directly at himself.

"Nobody got in Adam Brown's way but Adam Brown," Brown told The Daily News. "When I first signed, I was young and felt invincible. I played hurt all of 1986 and had to have Tommy John surgery. I sat out all of 1987."

Brown returned to hit AA San Antonio in 1988 and get his first brief look at AAA Albuquerque in 1990. But Brown never got his look at the majors, his career ending that year in 1995 playing at AA.

With the Dodgers, Brown started at rookie Great Falls. The catcher hit .301, with eight home runs in 64 games. Then he lost all of 1987.

Returning to the field in 1988, Brown played much of the year at single-A Bakersfield. In 92 games, he hit a smoking .352. He also earned a 30-game promotion to AA San Antonio and he continued his hitting, hitting .296.

He returned to San Antonio for 1989, but got into just 42 games on the year. In 1990, he got five games at AAA Albuquerque, but again played just 48 games on the season. He played the rest back at San Antonio.

Brown returned to the Dodgers organization for one more season, in 1992. He played 37 games between AA and AAA. For 1993, Brown moved to the Cubs system and 38 more games. Thirty-six of those were back in the Florida State League at Daytona.

Brown returned for one last look at AAA in 1994, 60 games at Iowa. He also started with 11 games at AA Orlando, helping tie one April game with a double.

Then came 1995. The occasion for Brown's interview with The Daily News was the strike. Brown signed a minor league contract with the Reds. And he refused to be a replacement player.

Instead, he returned to the minors, at AA Chattanooga. He played 77 games there, hitting .266, ending his career without making the majors.