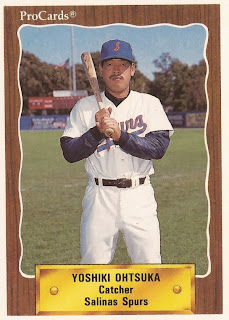 Yoshiki Otsuka only got into four games for the Yokohama Bay Stars in 1994, but he showed what he could do.

In those four games, Otsuka got four at bats and picked up two hits. Those two hits were both home runs.

Otsuka ended up playing in a total of eight seasons in Nippon Professional Baseball in Japan, getting into 68 total games. He hit just five other home runs.

Otsuka's professional career began in Japan in 1984, taken by the Nankai Hawks in the third round of the draft, out of Improve High School in Kanagawa Prefecture. Otsuka is also known by the Japanese form of his name, 大塚義樹. His name has also been spelled Yoshiki Ohtsuka.

With the Hawks, the catcher Otsuka first made the first team in 1986. He got into four games, picking up two hits in 10 at bats. One of those hits was a double.

He didn't see the first team again until 1989, playing a single game for the Daiei Hawks. He went 0 for 2.

For 1990, Otsuka moved to the United States and the California League's independent club, the Salinas Spurs. In 60 games for Salinas, Otsuka hit .225 and knocked in 12. He also hit a single home run.

Back in Japan, Otsuka got into 17 games with Daiei. He hit three home runs and ended up with a .357 average. He returned to Daiei for three more games in 1991, going 0 for 2.

Otsuka was then traded, sent to Taiyo that November for pitcher Yoshio Niiura. With Taiyo, the Yokohama Taiyo Whales, Otsuka played a single game in 1992. He then didn't return to NPB until 1994, getting those four games and two home runs for the Yokohama Bay Stars.

In 1995, Otsuka got into the most games of his career, 34 for Yokohama. He hit another two home runs, but ended with a batting average of .194. He got into just one more season in NPB, four games with Yokohama in 1996. He was then released that October.