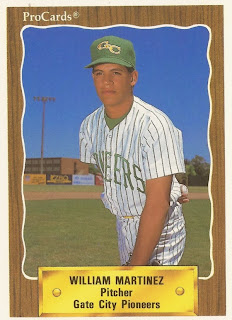 The Sumter Flyers had already blown a 3-0 lead in this July 1991 game against Augusta, now they needed William Martinez to come in and hold them.

And Martinez did. Over the next three innings, he gave up just a single hit and no runs. For his efforts, he also picked up the win, according to The Sumter Item.

Martinez was in his second professional season that summer for Sumter. He ended up seeing time in two more, but he never saw time above single-A.

Martinez' career began in 1990, signed by the Expos as a free agent, out of his native Venezuela. Martinez' name has also been spelled Williams Martinez.

He played his first season at rookie Gate City, getting 24 outings, three starts. He picked up two wins to seven losses, posting an ERA of 7.90.

Martinez went 2.1 innings of scoreless ball in an early May game. He got one of his starts in late July, going six innings without giving up a hit, and picking up the win.