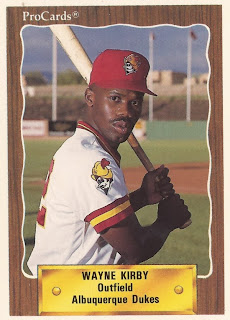 Wayne Kirby made the majors in 1991, in his ninth year as a professional. Two years later, in his 11th season, Kirby was a major league regular for the Indians, hitting .330 by mid-June and providing solid defense from the outfield.

"I don't regret being down there that long," Kirby told The Chicago Tribune. "but this is my time. I'm relaxed. I'm confident."

Kirby ended that season with a .269 average. But he also ended it as a major leaguer, playing the rest of the season with the big club. By the time Kirby's career was over, his first eight seasons in the minors turned into eight seasons with time in the majors.

Kirby's career began in 1983, taken by the Dodgers in the 13th round of the January draft. He played his first year in rookie ball and the next four largely in single-A.

In that time, Kirby stole no fewer than 23 bases in a single season. One year, in 1987, Kirby stole 62 between single-A Bakersfield and AA San Antonio.

"This is what I've been working for," Kirby told The Newport News Daily Press after his call-up. "I'm sure (manager Mike Hargrove) will mix me somewhere, doing a little pinch-running, pinch-hitting and play some outfield or infield. This break gives me an added boost to my career, and I plan to be the best I can when they call on me.''

In 1993, though, he was a regular. In early June, Kirby gunned down a runner at the plate, then knocked in the game-winning run on a sacrifice fly.

"If the bat's not working, I try to do anything else I can to help us win," Kirby told The Associated Press after that June game.

Kirby continued to play in the minors into 2001, in the Padres and Orioles systems. He last playing in the independent Western League.

His playing days over, Kirby has continued in baseball as a coach. He started in 2002 as a coach for single-A Lake County. By 2011, he was a coach in the majors, the first base coach with the Orioles.