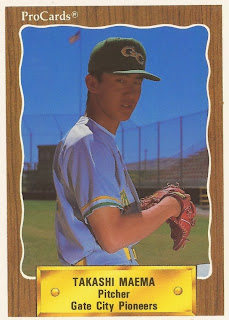 Takashi Maema made Nippon Professional Baseball, but it took him a few years to get there.

It took him into his eighth professional season to get there.

Once he did get there, he saw time in two NPB seasons for Hiroshima. That time included one season, 1996, where he got into 32 games for the Carp, posting a 3.88 ERA.

Maema's career began in 1989, taken by Hiroshima in the third round of the draft, out of Tosu, Saga Prefectural High School in Japan. The Japanese form of Maema's name is 前間卓.

With Hiroshima, Maema was sent to the United States for 1990, to play for rookie Gate City in the Pioneer League. Maema got into 19 games there, nine starts. He ended with a 7.16 ERA and 47 strikeouts.

Maema started off better, though, according to The Deseret News. Before a mid-July start, he was tied for fourth in the league with 28 strikeouts. He also had a 3.27 ERA. The Salt Lake Trappers then helped inflate that ERA, scoring three first-inning runs.

Maema then returned to Japan, but didn't make Hiroshima's first team until 1996. He finally debuted with the big club April 5 against Chunichi, according to his Wikipedia Japan page. He then got his first strikeout the next day, first save April 21 and first win May 12 against Yokohama.

In all, Maema picked up three wins and that one save, along with that 3.88 ERA. He also struck out 30.