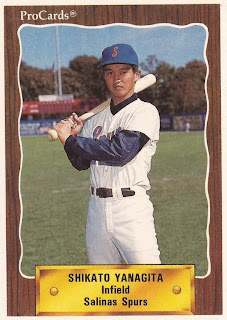 Shikato Yanagita swung and missed in this late-1990 game for the high-A Salinas Spurs, The Chicago Sun-Times featuring Yanagita's team, then describing his orderly walk back to the dugout.

It was one of 83 strikeouts Yanagita had for the Spurs that year, playing with the club on loan from the Daiei Hawks in his native Japan.

Yanagita would return to Japan later that year, he then time in nine Nippon Professional Baseball seasons. He also got his strikeouts under control. Over a total of 555 games in the NPB, Yanagita struck out just 129 times.

In three of those seasons, Yanagita was a regular with the Hawks, getting into more than 100 games each year. He never stuck out more than 31 times in a season.

Yanagita's career began in 1987, taken by the Nankai Hawks in the third round of the draft, out of Nobeoka Technical High School in Japan. Yanagita is also known by the Japanese form of his name, 柳田聖人.

He was originally a pitcher in high school, according to his Wikipedia Japan post, but soon turned infielder.

In 1990, Yanagita and other Japanese players were sent to the California League and Salinas. With the Spurs, Yanagita hit .270, with two home runs and 45 RBIs.

In December 1998, Yanagita was accused of taking part in a sign-stealing scheme. "There is no factual evidence to suggest that I'm involved. I told the team that I didn't do it," Yanagita told the Kyodo News agency. Nothing came of the ensuing investigation, according to Yanagita's Wikipedia page.

Yanagita continued playing through 2000, getting into 58 games his final year. Over his career, Yanagita got into those 555 total games, hitting .238, while knocking in 114.